Home > Back to Search Results > Relations with England...
Click image to enlarge 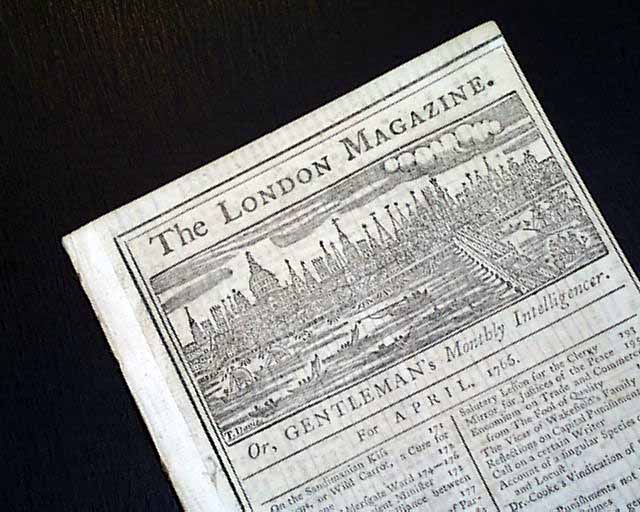 Item # 674484 THE LONDON MAGAZINE, England, April, 1766  Among the items included are: "On the Alliance between Church and State and the American Bishops...". A great & lengthy article is: "On The Trade & Commerce of the British Colonies" which considers the taxation and trade issues, of significance given the Stamp Act which was in force at this time. There is much great reading, with just one bit including: "...Altho the North Americans deem an internal tax laid by any but themselves as a direct breach of their freedom as British subjects, yet they never attempted to dispute the right of parliament to lay a duty on their exports or imports..." and so much more.
Also of significance is: "Abstract of the late Act of Parliament for the better securing the Dependence of his Majesty's Dominions in America on the Crown of Great Britain." (see for full report).
Complete in 48 pages, full title/contents page with an engraving of the skyline of London, 5 1/4 by 8 inches, and in great condition. No plates called for are present.