Home > Back to Search Results > Just prior to the Battle of Fredericksburg...
Click image to enlarge 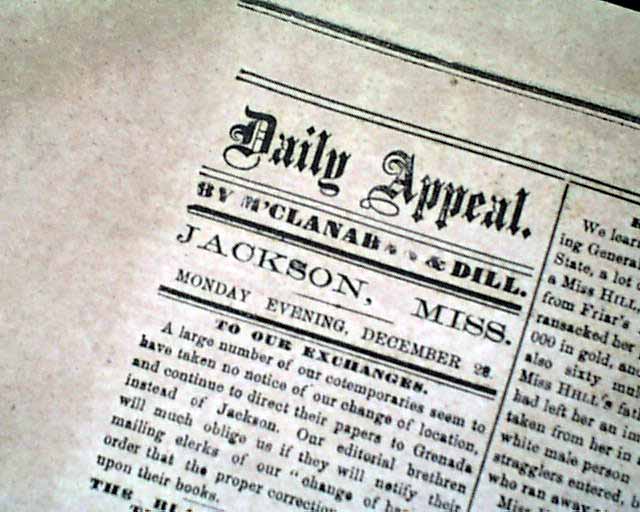 Just prior to the Battle of Fredericksburg...


THE MEMPHIS DAILY APPEAL, Jackson, Mississippi, December 22, 1862  If the title and city of publication seem to be in conflict, they are not. This newspaper had a fascinating history during the Civil War. Memphis was a Confederate stronghold up through the Battle of Memphis on June 6, 1862, at which time the Yankees moved in and it became a Yankee city. Being a strong voice for the Confederacy, the "Memphis Appeal" newspaper would not continue under Yankee control. As Wikipedia notes: "...On June 6, 1862, the presses and plates were loaded into a boxcar and moved to Grenada, Mississippi, where it published for some time. The Appeal later journeyed to Jackson, Mississippi, Meridian, Mississippi, Atlanta, Georgia, and finally Montgomery, Alabama, where the plates were destroyed on April 6, 1865, only days before the Confederate surrender, halting publication of what had been one of the major papers serving the Southern cause." So this one newspaper published in six different Confederate cities during the Civil War.
The front page has much of a column headed: "News from the Yankee Army before Fredericksburg--The Eve of the Great Battle", a portion of which begins: "...The great mass of the residents of Fredericksburg are now encamped back of the city, out of range of our guns, as they suppose..." and much more (see). Also on the ftpg. are: "Release of Maryland State Prisoners & their Arrival in Baltimore" "The End of the Yankee Generals" "Reported PEACE PROPOSITIONS From Richmond--What They Are--How They Were Received" "Governor's Message" "Practical Hints for Hard Times".
The back page includes: "The Black Flag--Policy of the Southern States" "Overtures For Peace" "Important From Kentucky and Tennessee" "Destruction of the Federal Gunboat Cairo" "From Nashville" "Federal Reports From North Mississippi" 'Letters From Richmond" and other items. There is also a notice: "Important to Absent Soldiers" (see), and two military "General Orders".
A rare opportunity for a Confederate newspaper printed in Jackson, Mississippi, its third city of publication during the Civil War. Complete as a single sheet newspaper of folio size, evenly toned with light damp staining at the right margin, nice condition.

News from this Confederate stronghold...