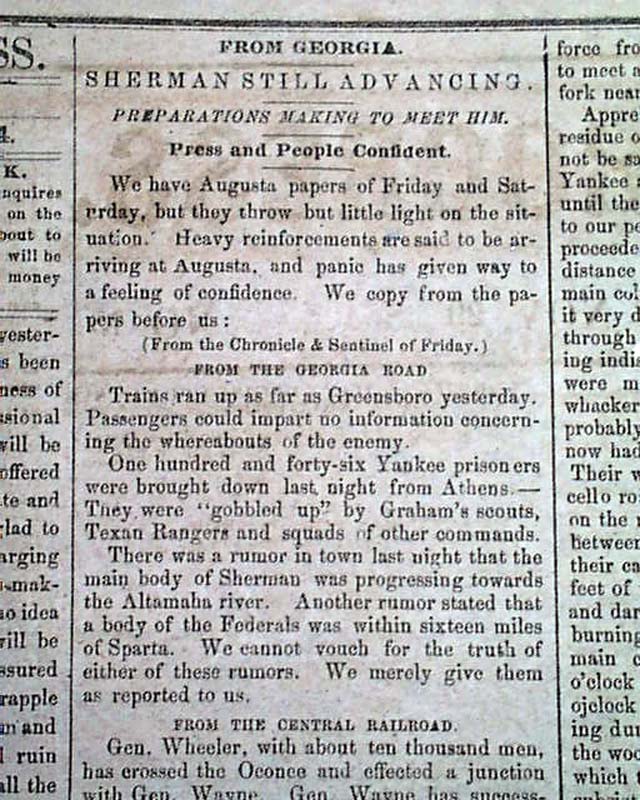 Raleigh was one of the last major cities of the South to fall into the hands of Sherman, surrendering on April 13, 1865, just one day before Lincoln was assassinated. This rare Confederate title is from the latter months of the Civil War.
The front page has reports headed: "Legislative Proceedings" "Congressional" and smaller items: "The London Times on the Seizure of the Florida" "From Richmond" plus a full list of the "North Carolina Legislature--Session 1864".
The back page has much on the war, with over 3 columns on: "From Georgia--Sherman's Movements--Preparations To Meet Him" with portions including: "...the whereabouts of the main body of the Yankee army is involved in mystery...Disgusted with the success of this, our first flank movement, we moved on to Eatonton to prepare for another..." and so much more. One of the subheads is: "Three Days & Nights in the Woods--Sherman's Advance on Milledgeville--Destruction of Property". A great wealth of fine information!
Complete as a single sheet newspaper which is typical for late-war issues from the South as most of the paper mills were in the North. Folio size and in great condition.