Home > Back to Search Results > Congress moves to Princeton due to a soldiers' revolt...
Click image to enlarge 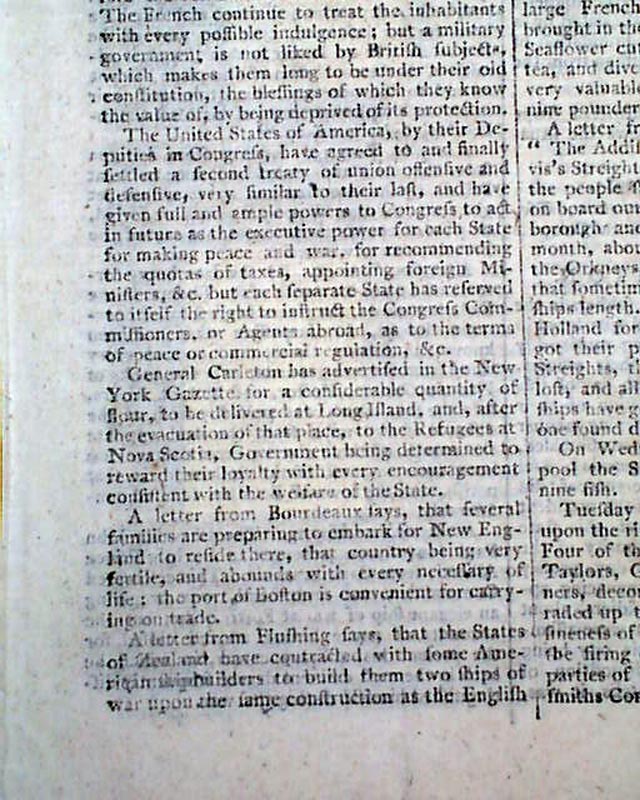 Congress moves to Princeton due to a soldiers' revolt...


THE LONDON CHRONICLE, England, Aug. 2, 1783  Page 3 has a report that the United States has further defined the powers of Congress to negotiating with countries, and: "...for making peace and war, for recommending the quotas of taxes, appointing foreign minsters..." and more. Also that General Carleton has advertised in the New York Gazette for flour to be: "...delivered at Long Island, & after the evacuation of that place, to the refugees at Nova Scotia...to reward their loyalty with every encouragement consistent with the welfare of the state."
Of very special note is: "A Proclamation" signed by Elias Boudinot, President of Congress, announcing the removal of Congress from Philadelphia to Princeton, New Jersey, where it would stay for six months. The reason is noted in the document: "...a body of armed soldiers in the service of the United States...having mutinously renounced their obedience to their officers...did proceed...in a hostile & threatening manner to the place in which Congress were assembled...". This was the protest of soldiers dissatisfied with being unpaid.
Also a short bit mentioning: "The Chevalier John Paul Jones came passenger...This celebrated Commander...was preparing an elegant ship of war at Porto Bello...the most eminent degree frequently distinguished himself during the war."
Eight pages,never bound nor trimmed, 9 by 12 inches, very nice condition.