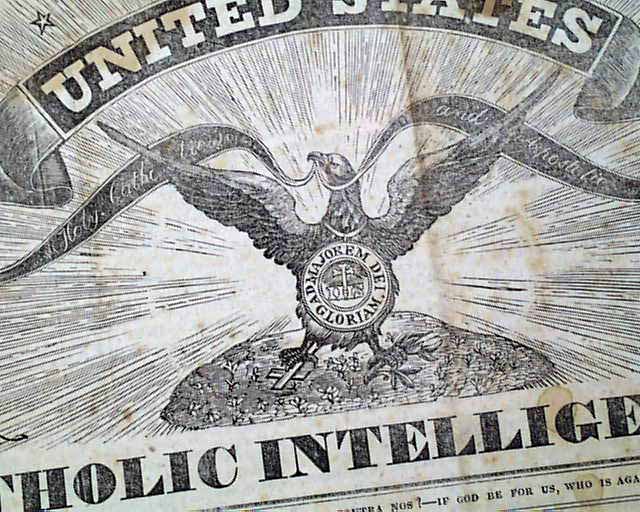 
UNITED STATES CATHOLIC INTELLIGENCER, Boston, Massachusetts, October 1, 1831  This rather rare title lasted for just one year, having begun in October, 1831 & ending in September, 1832. Its most striking feature is the very large and deep masthead, taking close to half of the front page, and which includes a large eagle with a scroll in its beak making it very displayable.
As the title would suggest, there is some religious content, although there is non-religious content as well.
In particular, there is, on an inside page under "Virginia Insurrection", a detailed extract of letter from Petersburg, Va., with details about Nat Turner's Rebellion stating that "...Our town, in common with the greater portions of southern Virginia, has recently been thrown into a... state of excitement, in consequence of an insurrection among the slaves of Southhampton county. There was not an absconding negro among the murderous band; and plunder was scarcely a secondary object..." & more about the meetings and "preachings" in recent weeks among the black folks, and the "hellish plot" to execute the massacre, described as "...the day of judgement--that a black sun was to rise in the east...", plus mention that there were sixty-four victims.
Additionally it states that: "...Not one did they willingly spare--they went for extermination..." & more, plus word that about 20 or 30 of the perpetrators were shot "...and about the same number have been or will be hung. The ringleader, Nat Turner, is not yet taken..." with more.
Eight pages, 10 by 14 inches minor damp staining and some foxing, good condition.