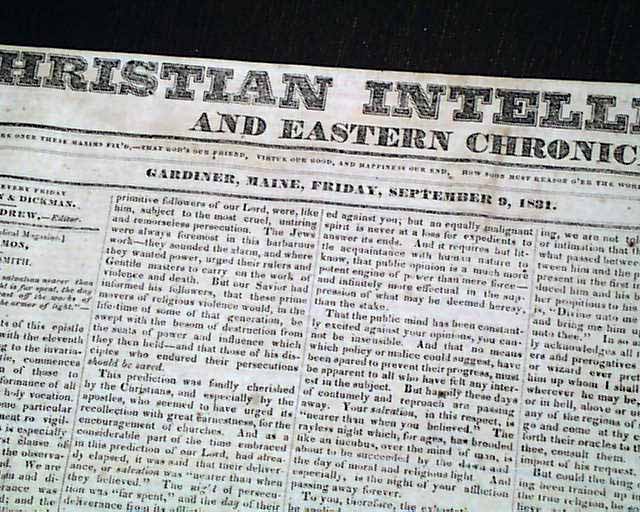 
CHRISTIAN INTELLIGENCER & EASTERN CHRONICLE, Gardiner, Maine, Sept. 9, 1831  Page 3 has a brief report headed: "Negro Insurrection " being the famous Nat Turner's slave rebellion. It mentions:: "...A principal leader of the Virginia insurgents is one Nat Turner, a Methodist preacher."
Under "The Insurrection In Virginia" is a much lengthier account from Richmond which speculates as to whether the: "...disturbance among the negroes was confined to a group of runaway slaves from the Dismal Swamp or a carefully planned insurrection....". Further on is: "...We learn that Ned [sic], the preacher and prophet had been taken; 75 whites killed and some missing; 38 blacks killed...", and also: "A fanatic preacher, by the name of Nat. Turner [Gen. Nat. Turner!] who had been taught to read and write, and permitted to go about preaching in the country, was at the bottom of this infernal brigandage. He was artful, imprudent, and vindictive, without any cause or provocation, that could be assigned..." and more about the planning, plus details about the attacks committed during the insurrection.
Four pages, nice condition.