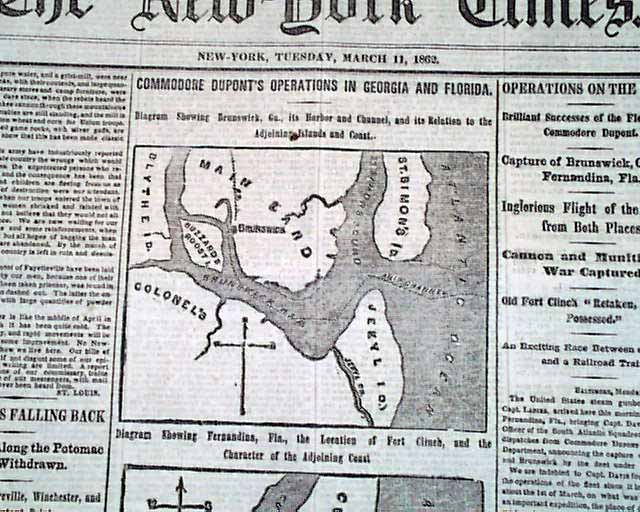 
NEW-YORK TIMES, March 11, 1862 Back page heads report the famous naval battle at Hampton Roads, Virginia, between the Monitor and Merrimac: "The Battle In Hampton Roads" "Interesting Details of the Two Days' Fighting" "How The Cumberland Was Sunk by the Merrimac" "The Congress Set on Fire and Blown Up" "Probably About a Hundred Lives Lost on the Cumberland" "The Terrific Engagement Between the Merrimac and the Monitor" "'The Battle Of The Giants'" "A Large Hole Stove in the side of the Merrimac" "Lieut. Worden Wounded". Content takes three columns. The front page has three maps headed: "Commodore Dupont's Operations In Georgia And Florida."
It was this naval action which ushered in the "modern" navy, with iron-clad ships of war.
Eight pages, light stain to the right margin, nice condition.

Great baseball game reports from the ...