Home > Back to Search Results > Earliest Lincoln letter to appear in a newspaper?
Click image to enlarge 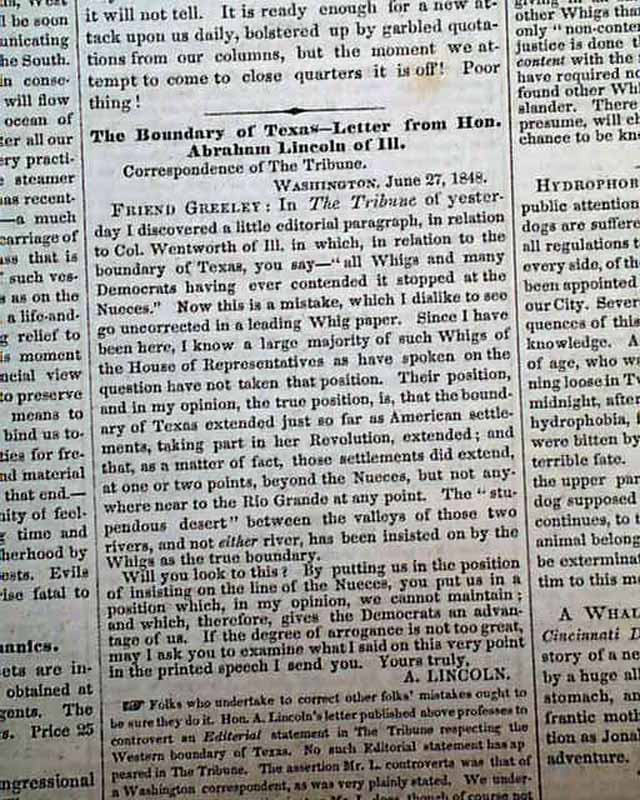 Earliest Lincoln letter to appear in a newspaper?


NEW YORK WEEKLY TRIBUNE, July 8, 1848  Page 3 has a fascinating item, the likes of which we have not found before.
Under the heading: "The Boundary of Texas--Letter from Hon. Abraham Lincoln of Ill." The letter, datelined at Washington, June 27, 1848, is addressed to: "Friend Greeley" and is signed in type: A. Lincoln.
The letter concerns a question on the boundary of Texas, insinuating that an earlier issue of the Tribune was in error with a report, Lincoln's letter ending with: "...Will you look to this? By putting us in the position of insisting on the line of the Nueces you put us in a position...we cannot maintain...therefore gives the Democrats an advantage of us..." with more.
This is followed by a rather sarcastic note on Lincoln's comments, presumably written by Horace Greeley.
This is (by far) the earliest letter signed by Lincoln we have found in a period newspaper.
This was Abraham Lincoln when he was serving just two years as a Representative from Illinois. In 1846 Lincoln ran for the United States House of Representatives and won. While in Washington he became known for his opposition to the Mexican War and to slavery. He served only one term, from March, 1847 thru March, 1849, so Congressional reports with mention of Abraham Lincoln are quite scarce. Lincoln returned home after his term and resumed his law practice.
Quite rare to find not just a period mention of Lincoln but a letter signed by him in type from long before he would become a national figure.
Eight pages, nice condition.