Home > Back to Search Results > Lincoln steps upon the national stage... The Cooper Union speech...
Click image to enlarge 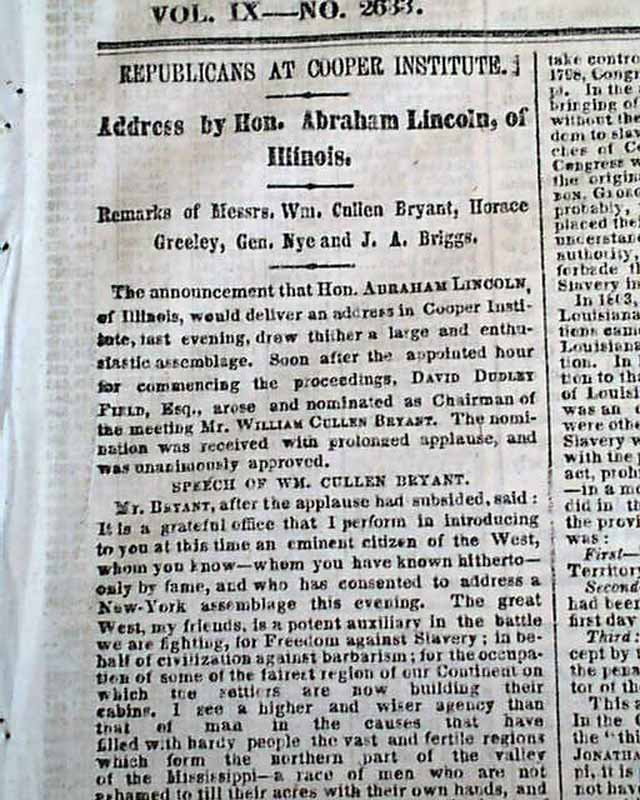 Lincoln steps upon the national stage... The Cooper Union speech...


THE NEW YORK TIMES, Feb. 28, 1860  Over two-thirds of the front page are devoted to coverage of this famous speech which is headed: "Republicans At Cooper Institute" "Address by Hon. Abraham Lincoln, of Illinois". This was the now famous Cooper Union speech by Lincoln.
At this point Lincoln had not declared himself a presidential candidate, and this was his first opportunity to establish his platform before an eastern audience, to strike a blow against slavery and for his own political future. The significance of this speech is such that a book recently written was titled
"Lincoln at Cooper Union: The Speech That Made Abraham Lincoln President", by Harold Holzer.
This issue not only gives the complete, lengthy text of this significant speech but has prefacing comments which begin: "The announcement that Hon. Abraham Lincoln, of Illinois, would deliver an address in Cooper Institute last evening drew thither a large & enthusiastic assemblage..." with a bit more.
What follows is the Wm. Cullen Bryant's introduction of Lincoln which includes: "...in introducing to you at this tie an eminent citizen of the West, whom you know...The great West, my friends, is a potent axillary in the battle we are fighting for Freedom against Slavery..." with more.
Then follows the text of Lincoln's speech, after which are a few closing comments.
An extremely significant newspaper reporting this signal event in the life of Abraham Lincoln, cementing his ties to the Oval Office and the fate of the country during the tumultuous Civil War.
Great to have this speech not only in the desired New York Times, but also on the front page, as other newspapers reported the text on inside pages. Only a few portions of this lengthy text are shown in the photos. This remains one of the most desired Lincoln events & rarely do we have such a newspaper to offer.
Complete in 8 pages, a few very discrete archival mends inside, very nice condition.