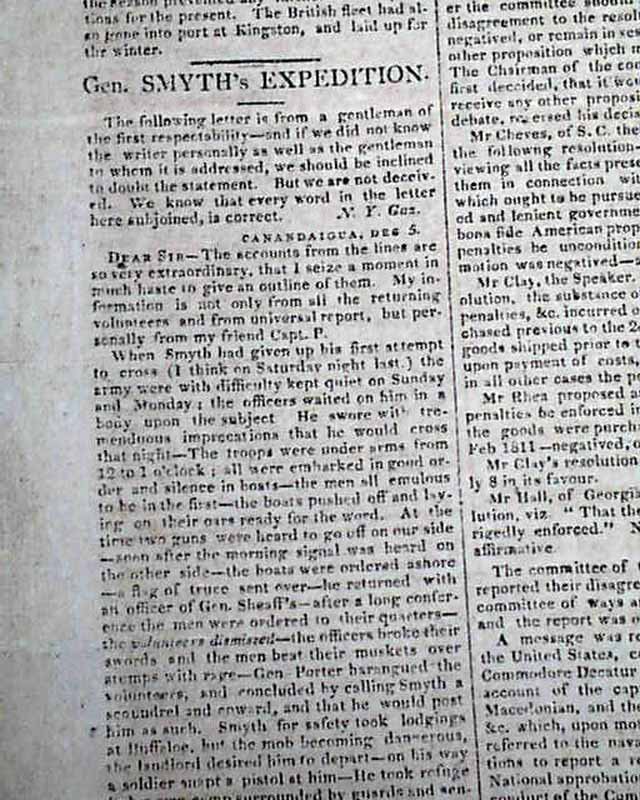 
THE REPERTORY & GENERAL ADVERTISER, Boston, Dec. 18, 1812  Inside reports include: "Gen. Smyth's Expedition", a letter signed in type by: Stephen Decatur datelined from the "U.S. S. United States, at sea, Oct. 30, 1812"; "The Prize" concerning the British frigate Macedonian; "The Crew of the Macedonian"; nearly 1 1/2 columns on: "Highly Important ! " "General Smyth's Reasons for Not Planting the American Standard on the Canada Shore" is a detailed letter signed in type by him: Alex. Smyth, Brig. Gen.
General Smyth had an interesting military career. During the Battle of Queenston Heights he refused to support his commander, General Stephen Van Rensselaer, a militia commander with no experience. After Van Rensselaer's disgrace, Smyth was given command and proved himself equally inept. His plan to invade Canada started with the Battle of Frenchman's Creek but was then abandoned because of problems due to poor organization.
After the failed attack on Canada, Smyth was insulted by Brigadier General Peter B. Porter, who accused Smyth of cowardice. Smyth challenged Porter to a duel, but both men went unscathed.
Four pages, archival strengthening at the blank spine, minor margin wear, generally good condition.