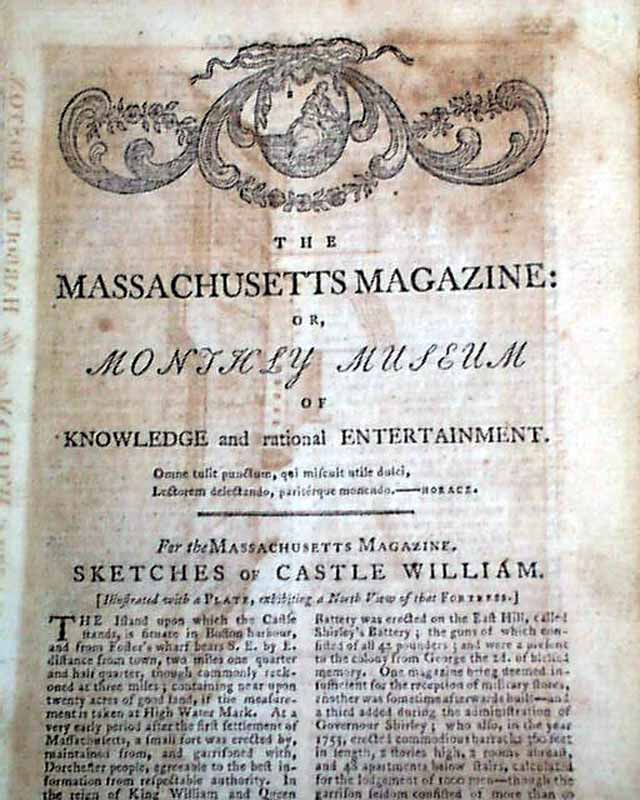 Item # 674218 THE MASSACHUSETTS MAGAZINE OR MONTHLY MUSEUM, Boston, May, 1789  Rarely are we able to offer an American imprint with a period report of Washington's inauguration and inaugural address. Great to have this text in this famous magazine published by perhaps the most renowned printer of the 18th century, Isaiah Thomas, whose private collection become the foundation of the American Antiquarian Society, the country's largest repository of pre-1876 printed Americana.
The reporting of this signal event in American history is terrific. The text includes: "On the 30th of April the great and illustrious WASHINGTON, the favorite son of liberty, and deliver of his country, entered upon the execution of the office of First Magistrate of the United States of America...The ceremony...was truly grand and pleasing...His Excellency was escorted from his house by a troop of light dragoons...to Federal Hall...when the oath prescribed by the Constitution was administered to him by the Chancellor of this state, who then said, 'Long Live GEORGE WASHINGTON, President of the United States', which was answered by an immense concourse of citizens...His Excellency then made a speech to both houses and then proceeded, attended by Congress, to St. Paul's Church where Divine Service was performed...In the evening a most magnificent & brilliant display of fire works was exhibited..." with more.
This is immediately followed by: "The PRESIDENT'S SPEECH to both Houses of Congress" which takes most of this page and most of the facing page as well, signed by him in type: George Washington. This is then followed by the address of the House of Representatives to Washington, followed by "The Answer of the President" signed: G. Washington. Then there is "The Address of the Senate to the President...in Answer to his Speech to both Houses of Congress" signed by: John Adams, and followed by "The President's Reply" signed: G. Washington. Following this is the "Address of the Citizens of Alexandria" to George Washington signed by the Mayor, D. Ramsay, with Washington's response signed G. Washington. And finally there is the: "Account of the President's Reception at Trenton in New Jersey, when on his way to the Seat of Federal Government, by the Ladies of that place."
For those who like to display their historic issues the presentation of this content within this magazine could not be better. Near the back of the issue on a left hand page is a banner head reading: "Papers Relative to the President of the Union." immediately under which is the text relating to the inauguration, with the balance of the page taken up with the beginning of the inaugural address. The facing right hand page is almost entirely taken up with the balance of the inaugural speech with Washington's signature (in type) near the bottom.
As if this was not sufficient content for one issue, a bit further back in the magazine under "The Gazette" portion is a great eye-witness account of the inauguration which vividly portrays all the emotion which was witnessed by those attending that magnificent occasion. The report is datelined New York, May 3, and includes: "I was extremely anxious to arrive here...Thursday last, when the President was qualified in the open gallery of the Congress House in the sight of many thousand people. The scene was awful, beyond description. It would seem extraordinary that the administration of an oath, a ceremony so very common & familiar, should...excite the publick curiosity. But the circumstance of his election--the impressions of his past services...the reverential manner in which he bowed down & kissed the sacred volume...one of the most august & interesting spectacles ever exhibited on this globe. It seemed from the number of witnesses to be a solemn appeal to Heaven and earth at once...I confess that was under an awful & religious persuasion, that the gracious ruler of the universe was looking down at that moment with peculiar complacency on an act, which to a part of his creatures was so very important...when the Chancellor pronounced in a very feeling manner, 'Long Live George Washington', my sensibility was wound up to such a pitch that I could do no more than wave my hat with the rest..." with more.
Beyond this is the report of how the Senate was divided into 3 classes for 2, 4, and 6 year terms in this initial election and how these classes were selected. Also in this issue is a very nice four page biography of the life of George Washington titled: "Memoirs of General Washington".
The two plates called for are present in photocopy, one being en engraving of: "A North View of Castle William in the Harbour of Boston."
This issue is complete in 70 pages. Nice full title/index page and measuring 5 1/4 by 8 1/4 inches. In very nice, clean condition.
The inauguration and inaugural address of George Washington remain among the most significant events to have captured in a periodical of the time. We are pleased to offer this rare issue.