Home > Back to Search Results > Completion of the Transcontinental Railroad...
Click image to enlarge 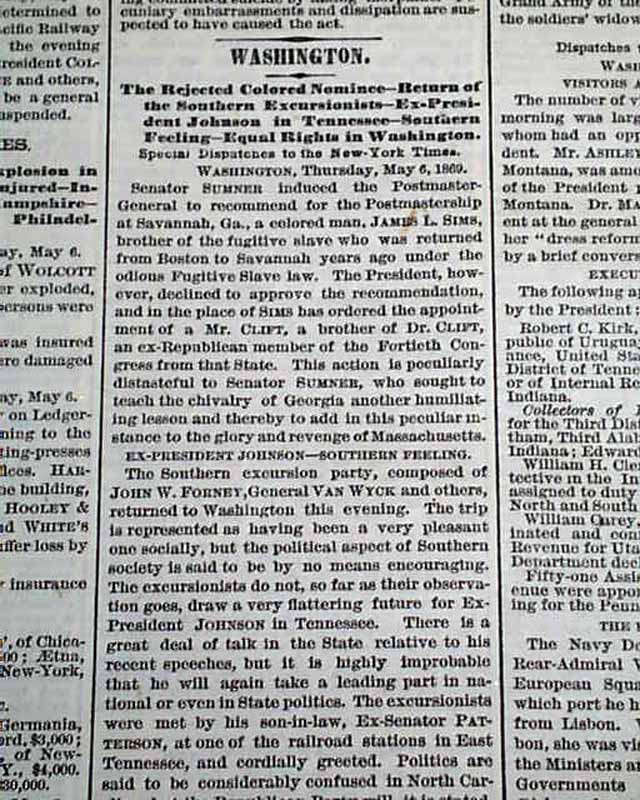 Completion of the Transcontinental Railroad...

Near the top of the front page is a report of the completion of the Transcontinental Railroad: "Central Pacific Railroad" "The Last Rail to be Laid To-Morrow--A Spike of Solid Gold to Finish the Work--Celebrations in Sacramento, Chicago, and other Cities" with some details.
Actually the ceremonial last spike would be delayed by 3 days.
Also on the ftpg: "The Rejected Colored Nominee--Return of the Southern Excurionists--Ex-President Johnson in Tennessee--Southern Feelings--Equal Rights in Washington". The article begins: "Senator Sumner induced the Postmaster General to recommend for the Postmastership at Savannah, Ga., a colored man, James L. Sims, brother of the fugitive slave who was returned from Boston to Savannah years ago under the odious Fugitive Slave law..." with more.
Eight pages, very minor loss to the corner of the back leaf, very nice condition.