Home > Back to Search Results > News of peace received in America...
Click image to enlarge 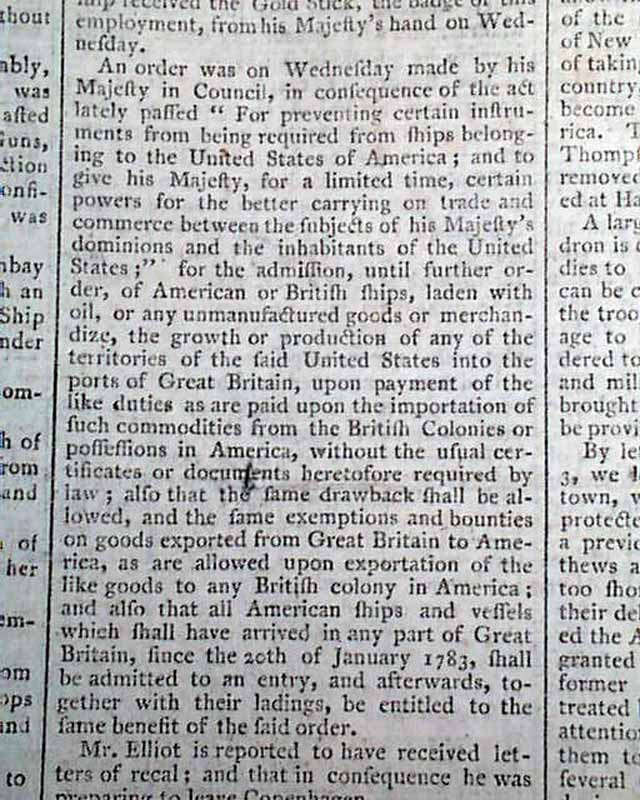 
THE LONDON CHRONICLE, England, May 17, 1783  Page 2 has various items concerning America including: "...the Congress of the United States of America, we hear, have refused to ratify the Provisional Treaty of Peace till after the British troops are withdrawn from New York..." and also: "...as  soon as the regular official information was received of the peace being actually concluded, Sir Guy Carleton convened the troops then quartered at New York & informed them that the orders he had received from government respecting them was that they were to retire to Nova Scotia...had authority to all them six months pay in advance..." with more, including text on the British merchants remaining in Charleston.
Page 4 has a full column with letters signed by General Guy Carleton and Admiral Digby in response to a letter from Robert Livingston concerning news of a peace being agreed upon and now next to proceed. Also from New York: "...a proclamation was read...at the City Hall...which proclamation declared the cessation of arms...agreed upon between his Majesty, the Most Christian King, the King of States, the States General of the United Provinces, and the United States of America...".
Page 5 has a brief note from Congress telling states to suspend enlistments for the army until further order from Congress. Page 7 has a letter from New York beginning: "The case of the Loyalists in this country is truly deplorable...the Loyalists are cast upon the mercy of their persecutors & enemies who have no mercy for them..." with much more on this.
Eight pages, never bound nor trimmed, 9 by 12 inches, very nice condition.