Home > Back to Search Results > Tired of pirating... news from Charlestown...
Click image to enlarge 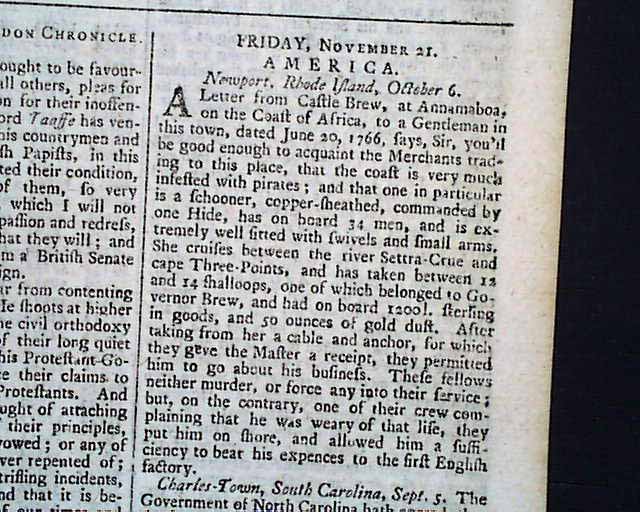 
THE LONDON CHRONICLE, November 22, 1766  The front page has an article with the dateline "Newport, Rhode Island, October 6" which is from "a letter from Castle Brew, at Annamaboa, on the Coast of Africa...". It talks about the pirate infested areas along the coastline, but in particular the one ship "commanded by one Hide". "...These fellows neither murder, or force any into their service; but, on the contrary, one of their crew complaining that he was weary of that life, they put him on shore, and allowed him a sufficiency to bear his expences to the first English factory."
Another article is from Charles-Town, South Carolina of the dividing line between the Providence and the Hunting Grounds claimed by the Cherokees.
Other news and advertisements are within.
Complete in eight pages, close trimmed at bottom with some text loss on some pages, otherwise in nice condition.