Home > Back to Search Results > Some terms of the peace treaty are announced...
Click image to enlarge 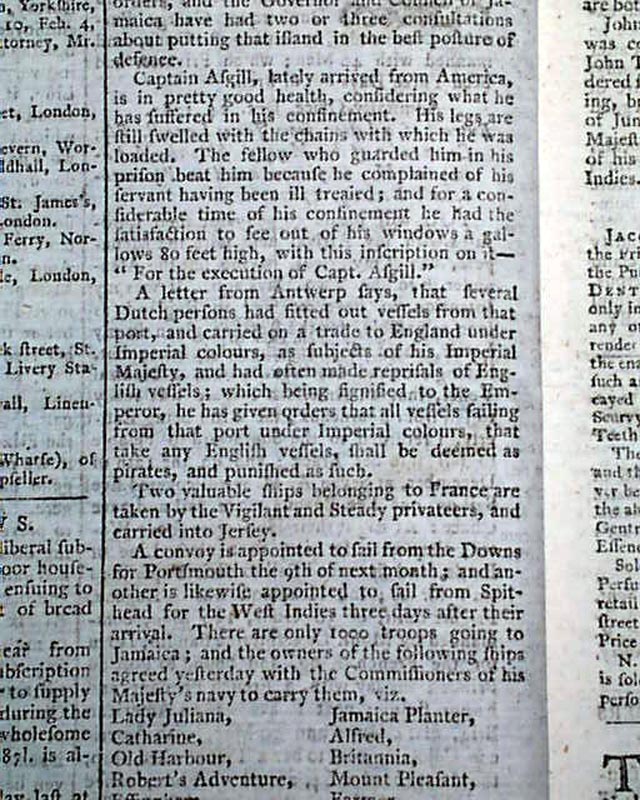 The back page has a very historic report presenting some of the terms of the peace treaty with a letter from Paris prefaced with: "While the Provisional articles are kept so profound a secret in London, the substance of them is well known & publicly talked of here: 'On the Part of Great Britain' That Great Britain irrevocably recognizes the sovereignty of the Thirteen United States of America as free and Independent States, absolutely and for ever. That they are to enjoy the benefits of uncontrolled commerce..." with more.
And then: " 'On the Part of America' That all the Loyalists, without exception, may return to their respective governments for a limited time only for the purpose of shewing cause why they should not be punished and why they ought to have leave granted them to remain. That no obligation is made by America to restore any property..." with more.
Page 5 has a great letter from Quebec in which the writer describes the city and vicinity. Page 2 has a paragraph concerning Captain Asgill noting: "...the fellow who guarded him in his prison beat him because he complained of his servant having been ill treated...", on the controversial Huddy/Asgill Affair.
Nearly half of page 6 is taken up with: "American News" with much on the financial situation with the American colonies. Also a report from the "Office of Finance" signed in type: Robert Morris.
Eight pages, 9 by 12 inches, never-trimmed margins, nice condition.