Home > Back to Search Results > Washington's letter on the Huddy/Asgill Affair...
Click image to enlarge 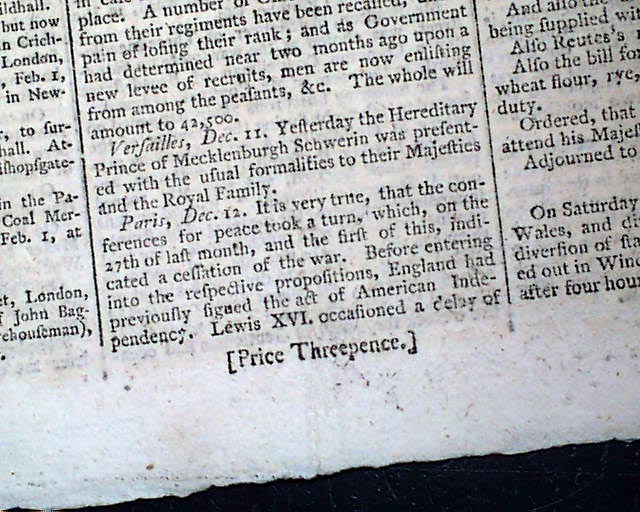 Washington's letter on the Huddy/Asgill Affair...

A few interesting bits in the earlier pages including a report from Paris: "It is very true that the conferences for peace took a turn...indicated a cessation of the war. Before entering into the respective propositions, England had previously signed the act of American Independency...".
A brief item mentions: "Lt. Gen. Greig is appointed Commander in Chief of his Majesty's forces in North America...in order to relieve his Excellency Sir Guy Carleton." Also that: "The resolves of Congress have of lately been more temperate & liberal than they used to be, and several American Loyalists have been allowed to return to their habitations without the least ...molestation whatever."
The most notable content is on page 5 with a report that Congress authorizing the release of Captain Asgill in the very controversial Huddy/Asgill Affair. Included is a lengthy letter signed in type by: G. Washington, in which he announces the release of Asgill.
Also a letter from Paris taking nearly one-third of the page with the latest reports on the negotiations in Paris for a peace settlement. And that Loyalists have been transported from Charleston.
Eight pages, never bound nor trimmed, 9 by 12 inches, very nice condition.