Home > Back to Search Results > The British evacuate Savannah, and so much more...
Click image to enlarge 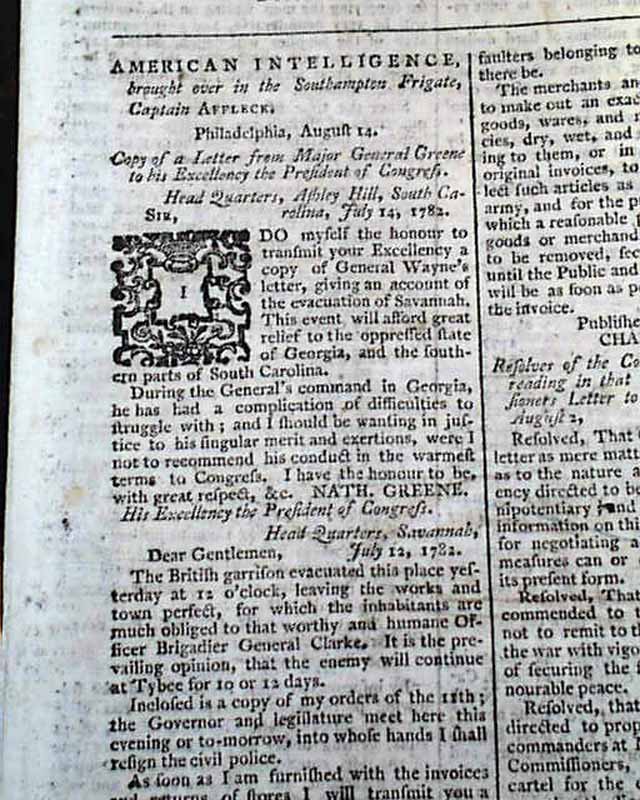 The British evacuate Savannah, and so much more...


THE LONDON CHRONICLE, England, Oct. 22, 1782  The entire ftpg. is taken up with: "American Intelligence" relating to the British evacuation of Savannah, Georgia. It begins with a letter from General Green to the President of Congress noting: "I do myself the honour to transmit your Excellency a copy of General Wayne's letter giving an account of the evacuation of Savannah..." signed in type: Nath. Greene. And what follows is Anthony Wayne's letter with the details beginning: "The British garrison evacuated this place yesterday at 13 o'clock, leaving the works & town perfect, for which the inhabitants are much obliged...".
There is then a letter from Congress relating to finding terms for peace (see), and another report from Charleston concerning the evacuation of Savannah, and more.
More American news takes much of page 2 as well as pg. 3 with: "Resolved, That Congress approve the conduct of General Washington in refusing to enter into any discussion with General Carleton on the subject of the treason laws passed by the several States...". Then a letter from General Leslie to Sir Henry Clinton dated at Charleston which mentions: "...I am very happy to inform you of his success on a late excursion upon the Santee...".
More American content on pg. 4 including: "...that Gen. Washington was lying on the White Plains but had not made any attack on New York." and content on pg. 6 as well including; "...full of the joyful tidings that Sir Guy Carleton has been defeated at King's Bridge by the  combined forces of Washington and Rochambeau...".
Eight pages, never bound nor trimmed, 9 by 12 inches, very nice condition.