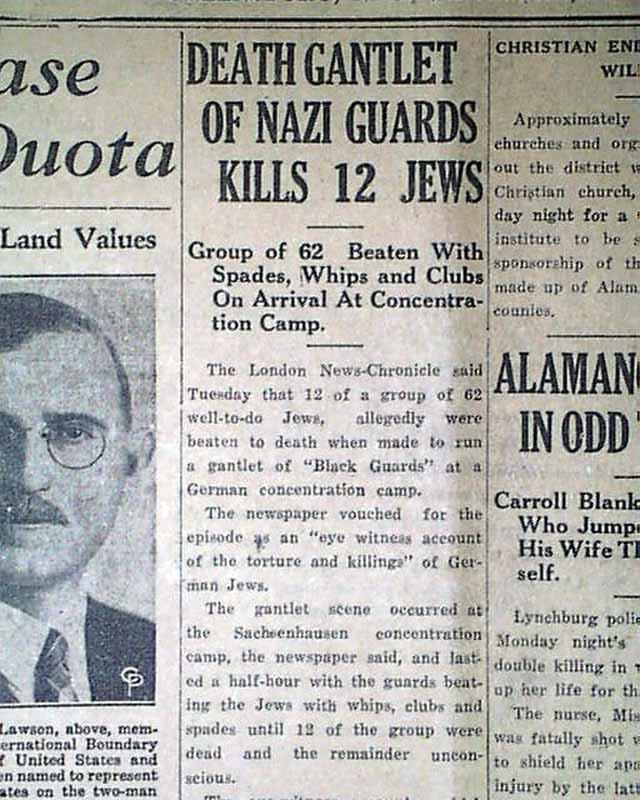 
THE GREENSBOROUGH PATRIOT, (Greensboro), North Carolina, Nov. 24, 1938  Front page coverage has a one column heading: "DEATH GANTLET OF NAZI GUARDS KILLS 12 JEWS ", with subheading: "Group of 62 Beaten with Spades, Whips and Club on Arrival At Concentration Camp.". The article goes on to state in part, "...12 of a group of 62 well-to-do Jews, allegedly were beaten to death when they were made to run a gauntlet of 'Black Guards' at a German concentration camp." The lengthy article goes on to say, "The arrested were mostly well-to-do lawyers, doctors, landlords, engineers, business men and two rabbi".  Considerable details are present.
Also, on the front page is an article with a 1 column heading: "NERO HANGED BY WHITE MOB IN MISSISSIPPI".
Additionally, the front page has a fascinatingly odd article about a 6 year old girl who dreamed of her own death before it happened.
Other news of the day and period advertising is found throughout.
Complete in eight pages and in nice condition.