Home > Back to Search Results > Thoughts on independence for America...
Click image to enlarge 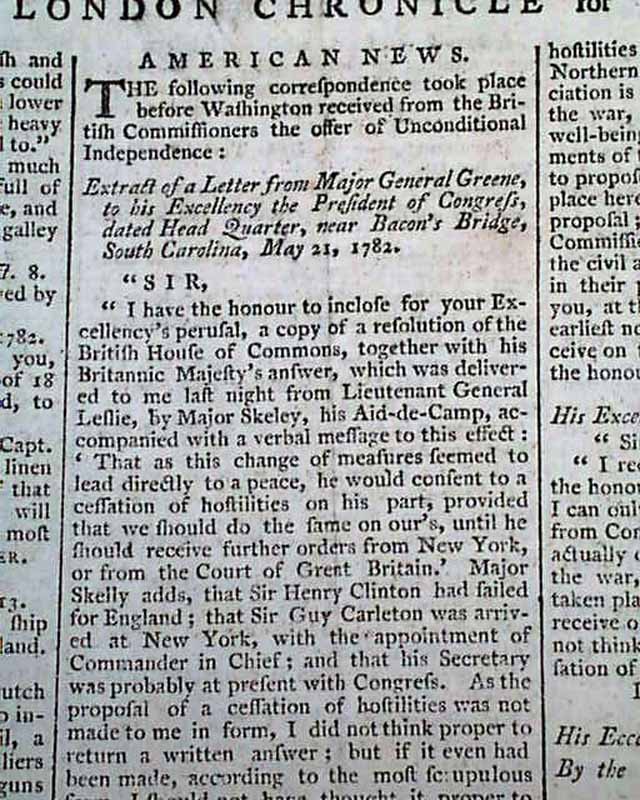 Thoughts on independence for America...

* American Independence from England ?
* Revolutionary War coming to an End

Half of page 7 is taken up with: "American News" with the first report prefaced with: "The following correspondence took place before Washington received from the British Commissioners the offer of Unconditional Independence:" and what follows is a letter from Major General Green to the President of Congress dated at Bacon's Bridge, South Carolina, the letter signed in type: Nat. Greene.
Following this is a message: "...on the subject of a verbal message from Lt. General Leslie proposing a cessation of hostilities in this country...", and following that is a letter signed in type by: Alexander Leslie, dated at Charleston.
There is then another letter signed by Nathaniel Greene, and then a letter from the Secretary of Congress, Charles Thompson, which mentions: "...That the Secretary at War do inform Major General Greene that the United States assembled in Congress, approve his conduct in rejecting the overtures for cessation of hostilities...".
Eight pages, never bound nor trimmed, 9 by 12 inches, very nice condition.