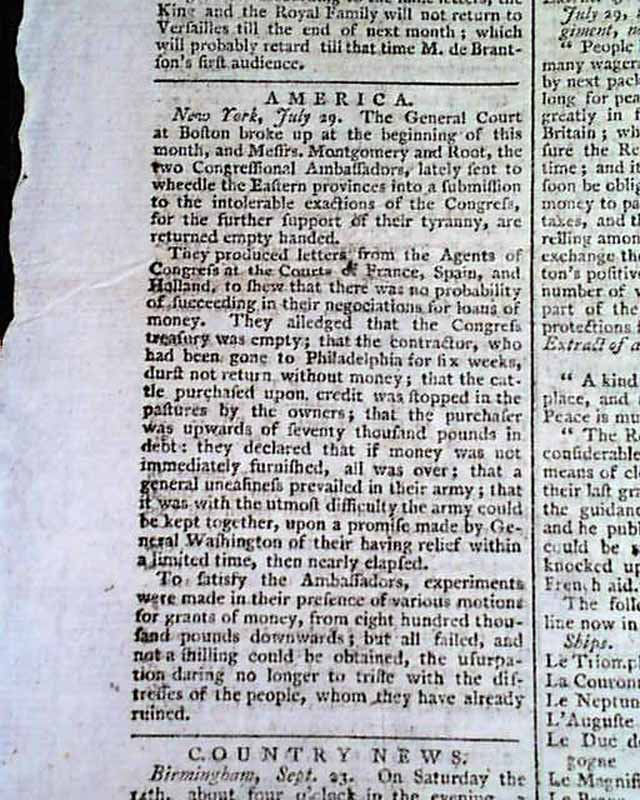 Page 2 has news headed "America" mentions: "...lately sent to wheedle the Eastern provinces into a submission to the intolerable extractions of the Congress for the further support of their tyranny, are returned empty handed." Also a letter from New York: "People here in general talk much of peace...I fear it will be patched up, greatly in favor of the Rebels & against Britain, which I should be sorry for as I am sure the Rebels are at a very low ebb at this time, and it is expected Washington will very soon be obliged to disband his men for want of money to pay them..." with more.
Another letter from New York begins: "A kind of tacit cessation of arms had taken place & nothing done by either armies--Peace is much talked of. The Rebels...cannot collect any considerable force being totally without the means of clothing...".
There is the latest concerning the Huddy/Asgill Affair, with: "...appears that Capt. Lippencot had been acquitted by the Board of Refugees, but a court martial from the regulars had been held and their sentence was not declared. The Captain remained still in prison and General Washington persisted in having satisfaction for the death of Captain Huddy." And another report notes in part: "...Capt. Asgill was said to be in a very bad state of health...That officer was still closely confined...It is much to be feared the unfortunate circumstances concurring against that young officer will effect what perhaps is not intended by his enemies in war...".
Further on: "...the Loyalists at New York have almost given up the cause, they say the independence of the United States appearing to them a measure determined on by this country. Mr. Franklin, who is just arrived from New York, had been proscribed by Congress..." with more. Back page American content as well.
Eight pages, never bound nor trimmed, 9 by 12 inches, very nice condition.