Home > Back to Search Results > The Loyalists to evacuate Savannah...
Click image to enlarge 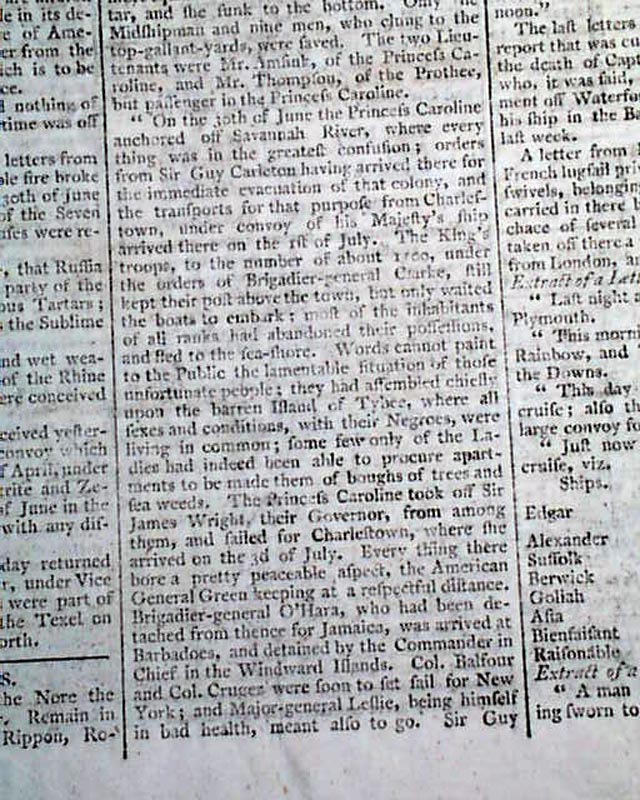 The Loyalists to evacuate Savannah...


THE LONDON CHRONICLE, England, Aug. 24, 1782  Page 6 has a report noting in part: "...anchored off Savannah River where every thing was in the greatest confusion; orders from Sir Guy Carleton having arrived there for the immediate evacuation of that colony...words cannot paint...the lamentable situation of those unfortunate people; they had assembled chiefly upon the barren Island of Tybee where all sexes and conditions, with their Negroes, were living in common..." and then more with mention of Charleston and New York.
The back page has a letter from Charleston which includes: "It seems Great Britain, under the repeated disasters & with a view to contract her posts & only carry on defensive war here, had ordered  the evacuation of Savannah, but the great naval victory we lately obtained & the distresses of the rebel army & desertion prevailing among them, had led us to imagine this plan, if not entirely laid  aside, was at least removed to a very great distance. To our utter astonishment, however, an order was sent some weeks ago for the evacuation of Georgia & East  Florida...The misery & ruin brought upon the unhappy loyal inhabitants by this order can hardly be conceived..." with more on this.
Eight pages, never bound nor trimmed, 9 by 12 inches, very nice condition.