Home > Back to Search Results > The Captain Huddy and Captain Asgill affair...
Click image to enlarge 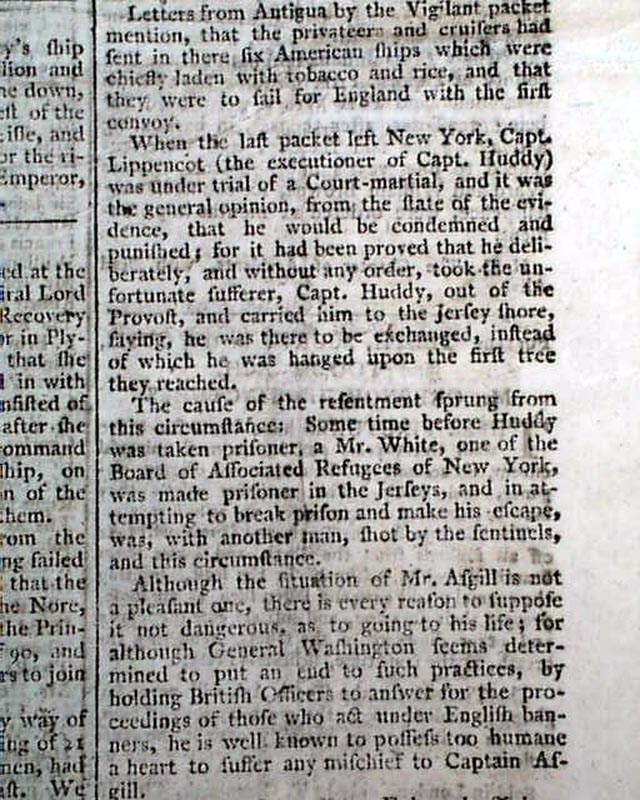 
THE LONDON CHRONICLE, England, July 16, 1782  Page 3 has a nice accounting of the controversial hanging of American patriot Capt. Huddy and the resulting Asgill Affair including: "...Capt. Lippencot (the executioner of Capt. Huddy) was under trial of a court martial...that he would be condemned & punished; for it has been proved that he deliberately, & without any order, took the unfortunate sufferer, Capt. Huddy...and carried him to the Jersey shore saying he was there to be exchanged, instead of which he was hanged upon the first tree they reached..." with more on this, and then: "...Although the situation of Mr. Asgill is not a pleasant one, there is every reason to suppose it not dangerous...General Washington...is well known to possess too humane a heart to suffer any mischief to Captain Asgill." And then over one-third of a page is taken up with more great content on the Huddy/Asgill Affair including a letter from General Clinton to General Washington.
"American News" has reports from Savannah, Ga. concerning a battle with the Creek Indians at New Hope Plantation.
A wealth of fine content.
Eight pages, never bound nor trimmed, 9 by 12 inches, very nice condition.