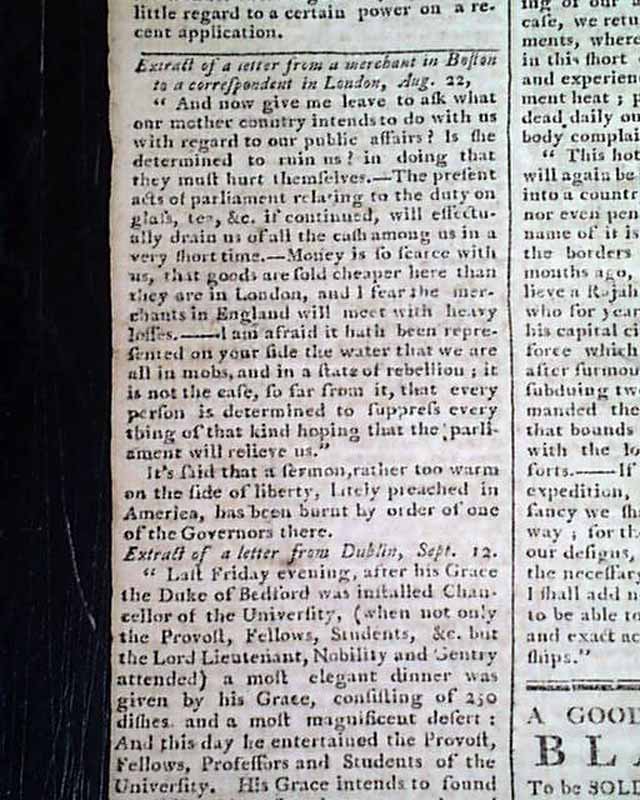 The publisher of this newspaper had Loyalist leanings, causing its demise before the formal outbreak of the Revolutionary War.
An inside part report includes a letter from Boston mentioning: "And now give me leave to ask what our mother country intends to do with us with regard to our public affairs? Is she determined to ruin us? In doing that they must hurt themselves. The present acts of parliament relating to the duty on glass, tea, etc. if continued will effectually drain us of all the cash among us in a very short time..." and ending with: "...It is said that a sermon, rather too warm on the side if liberty, lately preached in America has been burnt by order of one of the governors there."
Further in this issue is a report: "...from Hard labour, near Ninety Six, on the western frontiers, that John Stuart, Superintendent of Indian affairs...finished the congress with the Cherokees having concluded the treaty ratifying the boundary line between the Cherokee lands & his Majesty's province of South Carolina, North Carolina, and Virginia..." with more.
Another report datelined Philadelphia includes: "Letters from London mention that Dr. Franklin is indefatigable in his endeavours to convince the ministry of the loyalty of the colonies & that a tender & motherly behaviour on the part of Britain would go farther to support her authority with her American children than all her force by sea and land."
Eight pages, 8 1/2 by 10 1/2 inches, very nice condition.