Home > Back to Search Results > Much on the taking of Savannah by Sherman...
Click image to enlarge 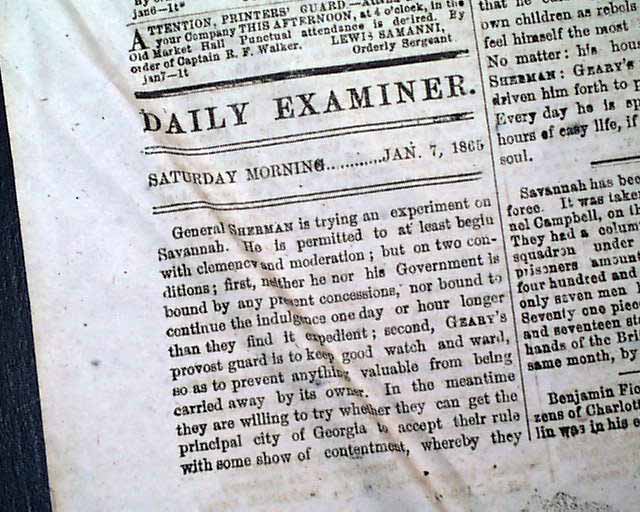 Much on the taking of Savannah by Sherman...


DAILY EXAMINER, Richmond, Virginia, Jan. 7, 1865  An issue from the capital of the Confederacy & quite late in the Civil War. The editorial begins: "General Sherman is trying an experiment on Savannah...This Sherman, it  will not be forgotten, is the same who wrote the letter of instructions to his Adj. General on the way in which he was to deal with the inhabitants...'Rebels' own nothing--all they have is forfeited; even their lives; if permitted to live, it is only that they may repent; and that, while repenting, they may be made useful to the cause of the 'Union', otherwise it would be a mercy to them to put them all suddenly to death. On these principles the whole Georgia campaign has been conducted..." with much more.
Also in this issue are: "Confederate States Congress" "The Virginia legislature" "Latest News from the North" "The Evacuation of Savannah" which is lengthy & very detailed; "The War News--From Savannah" "City Intelligence" & other smaller items.
Complete as a single sheet newspaper with a one column masthead, typical of Southern newspapers from late in the war as most paper mills were in the North. In very nice condition.