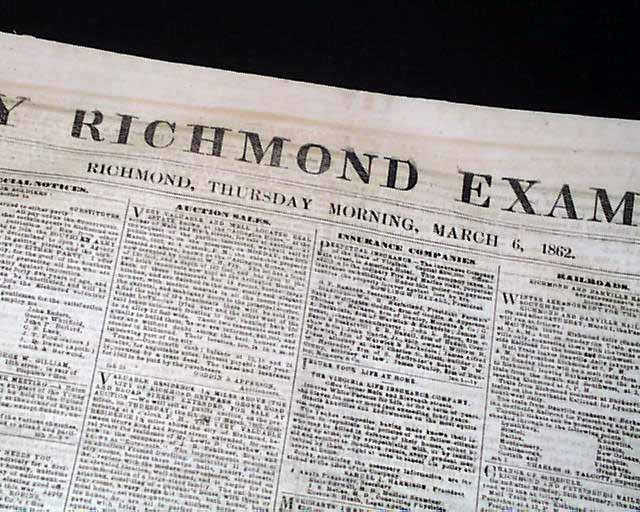 
DAILY RICHMOND EXAMINER, Virginia, March 6, 1862   The front page is entirely taken up with ads and notices, while page 2 has much concerning the Civil War. Page 2 begins with the always interesting & quite lengthy editorial, this one taking the unusual step of being critical of the Confederate government & its growing bureaucracy, noting: "...What the Confederate government lacks is not more offices, but more brains. Whether brains come to it under the label of a Commanding General, a re-organized cabinet, or simply a new Secretary of War, does not matter at all...". Also: "The Confederate States have been humiliated...".
Also on the inside pages: "The Prisoners at Fort Donelson--Their Real Number" "The Office of Commanding General" "Infernal Machines In Savannah River" "The Northern Congress" "Sharp Sabres For Cavalry" "Telegraphic News" "Sketch of Nashville" and lengthy reporting from: "The Confederate Congress". The back page is mostly taken up with a lengthy list of Acts of the Confederate Congress, many relating to the Civil War.
Four pages, never bound nor trimmed, in very nice condition.