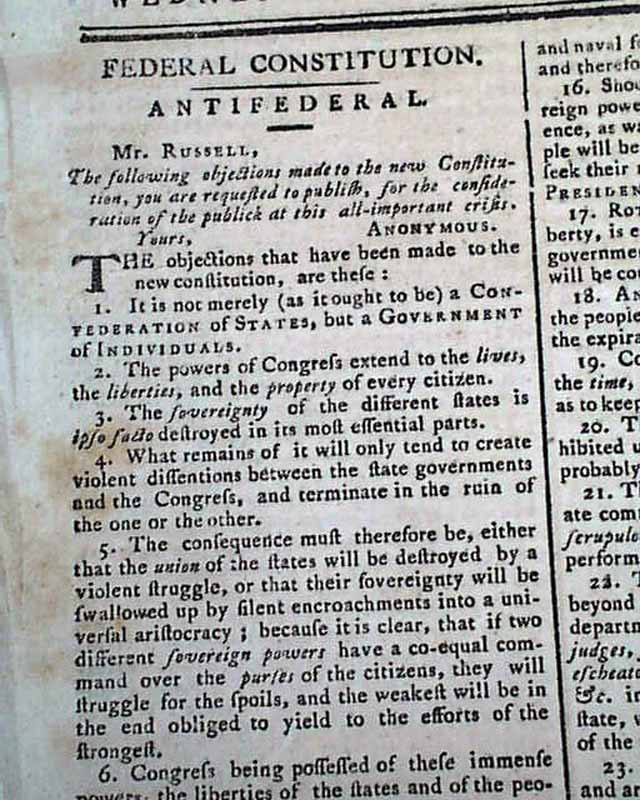 
(was $740) THE MASSACHUSETTS CENTINEL, Boston, Nov. 21, 1787  A great issue from just 2 months after the new Constitution was created.
Fully half of the ftpg. is taken up with an interesting article: "Federal Constitution--Antifederal" which is headed: "The following objections made to the new Constitution, you are requested to publish, for the consideration of the publick at this all-important crisis." in which the writer lists 23 points he takes issue with. It is signed in type: "An Officer of the late Continental Army." Half a column on the ftpg. is taken up with "Federal" being a list of 9 points in support of the new Constitution, the last of which reads: "To show the integrity of the Convention, the result of their deliberations is referred for confirmation to the publick at large." and the list also includes some concluding thoughts, including: "...The reasoning part is over; decision is now the object...".
But pages 2 and 3 contains the most notable content with over a full column headed: "The Hon. George Mason's Objections to the New Constitution" .
Mason was a member of the Constitutional Convention but refused to sign the document (one of just 3), offering a series of objections to ratification. He would be a significant influence on American political thought & events. The Virginia Declaration of Rights, which Mason principally authored, served as a basis for the United States Bill of Rights, of which he has been considered the father.
The report in this issue includes in part: "There is no declaration of rights, and of the laws of the general government being paramount to the laws & constitutions of the several states, the declarations of rights in the separate states are no security...In the House of Representatives there is not the substance, but the shadow only of representation...The President of the United States has no Constitutional Council...The President of the United States has the unrestrained power of granting pardons for treason...The State Legislatures are restrained from laying export duties on their own produce..." with much more. A very historic report.
Page 3 has mention that Thomas Jefferson had been elected Ambassador to France. Pg. 2 has a report which includes: "Congress has resolved that the quotas assigned to the several ships which were under the command of Capt. John Paul Jones in Europe...That the monies paid by Capt. John Paul Jones into the hands of the Hon. Thomas Jefferson be distributed...".
Four pages, never-trimmed margins, very nice, clean condition.