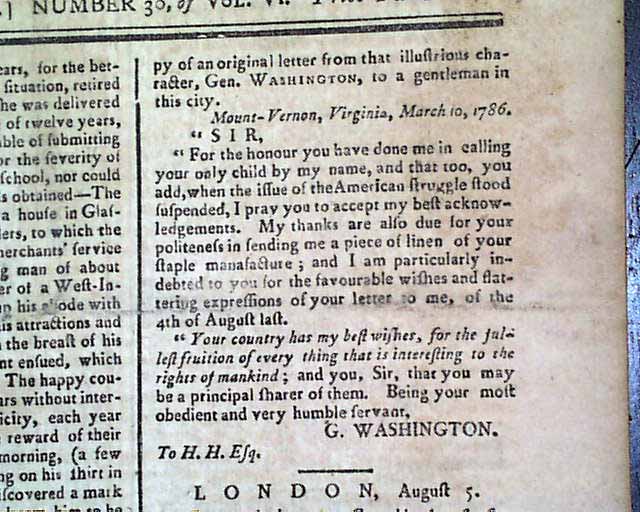 
THE MASSACHUSETTS CENTINEL, Boston, Dec. 30, 1786  The front page has a letter to a gentleman in Dublin from George Washington, datelined at "Mount Vernon, Virginia" and signed in type: G. Washington.
Page 2 has a report from Savannah concerning relations with the Lower Creek Indians. Also mention that: "...is acknowledged...from Charleston...that full 12,000 negro slaves have been imported from Africa into that state and Georgia within the last three years..." Also a letter from Pittsburgh concerning the troubling relations with Indians.
Then a report of a letter to the state Societies of the Cincinnati: "...from his Excellency General Washington, signifying his desire not to be again elected President-General on account of the variety of affairs to which he is under the necessity of attending, as well as of his ill state of health...".
Page 3 also has mention concerning the Shays' Rebellion.
Four pages, nice condition.