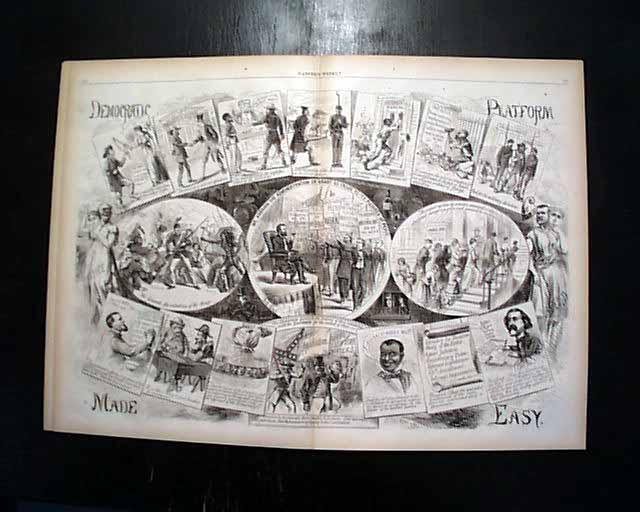 The prime feature is the double-page centerfold titled: 'Democratic Platform Made Easy' with many vignettes, several which portray Blacks in various uncomplimentary and stereotypical settings/charicatures.The front page of the issue shows a one-third page illustration 'St. Anthony Falls Dam, Minnesota' along with illustrations of 'Gov. J.W. Geary, of Pennsylvania' and "Gov. R. B. Hayes, of Ohio'. A nearly halfpage is of the 'New Fish Market, New York City'. Articles of "Hon. John R. Brady" and "Pres. Eliot, of Harvard" also feature illustrations of them. A fullpage illustration is 'Flamingoes, Pelicans and Dunkers at Sandwich Harbor, South Africa'. A page contains two halfpage illustrations "Hesitation" and "A Leopard Hunt with Fox-Hounds in Southern India". The backpage features a Thomas Nast political cartoon.
Complete in 16 pages and contains additional prints and related text. a few tiny margin tears, generally very nice.