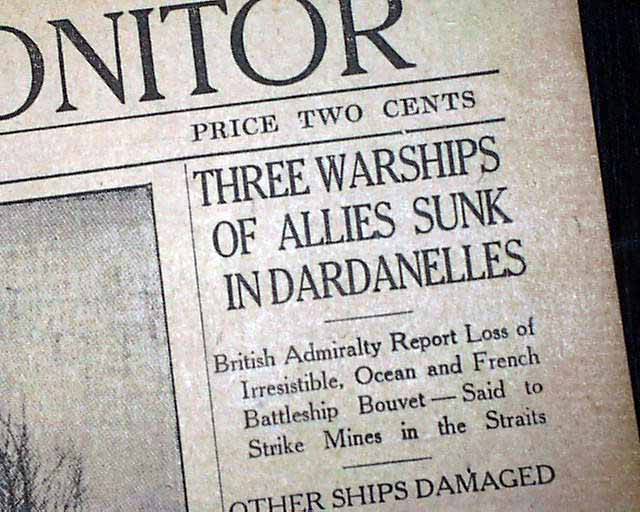 This 20 page newspaper has one column headlines on the front page: "THREE WARSHIPS OF ALLIES SUNK IN DARDANELLES", "British Admiralty Report Loss of Irresistible, Ocean and French Battleship Bouvet--Said to Strike Mines in the Straits" and more (see photos). This is 1st report coverage on the sinking of the French Battleship Bouvet in which 660 were killed.

Other news and advertisements of the day. Minor margin wear, otherwise nice condition.

wikipedia notes: The Bouvet was part of the squadron contributed by the French to the Dardanelles Campaign. On 18 March 1915, the British commander, Rear Admiral John de Robeck, launched a concerted effort to overwhelm the Turkish forts defending the Dardanelles straits and Bouvet was one of the four French battleships making up the second line.

Bouvet sustained eight hits from Turkish artillery fire and the forward turret was disabled. When de Robeck ordered the French line to retire, Bouvet turned to starboard into Erin Keui Bay where a line of mines lay undetected. The battleship struck a mine below the starboard 274mm turret and suffered a massive explosion, probably of a magazine. Flooding was rapid since the ship lacked effective internal compartmentation (the detonation occurred in a very large machinery space that extended almost a third of the length of the vessel). The ship heeled very rapidly, since the hull was designed (like many French battleships designed by Huin) with a "tumblehome" form, meaning the sides sloped inwards; this meant that the hull was losing stability for every degree that it heeled over, which sped up the process of capsizing. Bouvet capsized and sank within two minutes, taking around 660 crew with her.