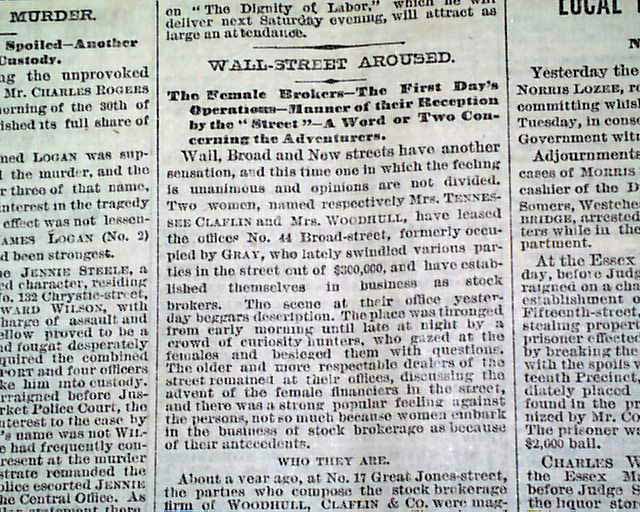 The top of the back page has an intriguing report of a very notable--yet widely unknown--Wall Street "first".
Under the column heads: "WALL STREET AROUSED" "The Female Brokers--The First Day's Operations--Manner of Their Reception by the 'Street'--A Word or Two Concerning the Adventurers" is the report of Victoria Woodhull and her sister, Tennessee (Tennie) Claflin, being the first woman to open a brokerage firm on Wall Street.
As the website "Bumped" notes, Cornelius Vanderbilt helped Victoria and Tennessee with the finances needed for them to open Woodhull, Claflin, & Co., the first for-women-by-women brokerage firm in the United States.
On February 5, 1870, Victoria and Tennessee, then 31 and 24, officially opened the doors of Woodhull, Claflin, & Co. for business. Despite a sign stating, “Gentlemen will state their business and then retire at once,” most of the estimated four thousand visitors on that first day were men, presumably shocked by the women now working in their midst.
Opening a successful brokerage wasn’t the whole plan. As Victoria later said, “We went unto Wall Street, not particularly because I wanted to be a broker…but because I wanted to plant the flag of women’s rebellion in the center of the continent.”
And in some ways, that’s exactly what she did. Later in 1870 the sisters used the profits from the brokerage firm to launch Woodhull & Claflin’s Weekly, one of the country’s first publications published by women.
Woodhull, Claflin, & Co. proved to be a huge success. According to some versions of the story, Victoria and Tennessee supposedly made $700,000 in the first six weeks (that’s more than $13 million today).
Curiously, this article is followed by: "Woman Suffrage" which takes over half a column. And another bkpg. article is headed: "Woman's Work And Wages" "Some of the Wrongs Suffered by Females" with more.
Eight pages, very nice condition.