Home > Back to Search Results > The premiere issue of the war: the Declaration of Independenceâ¦
Click image to enlarge 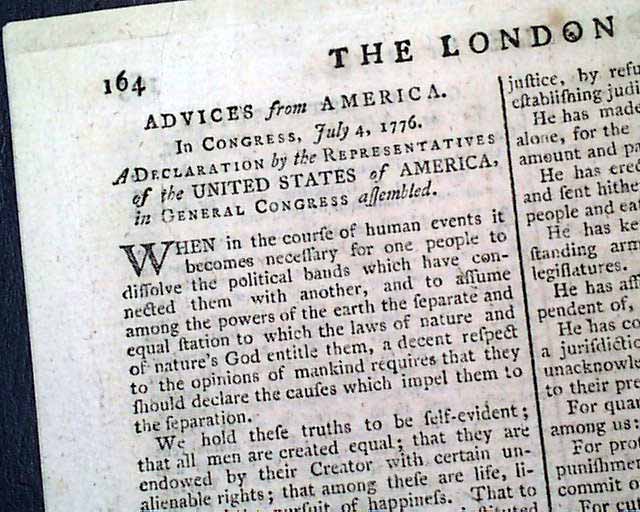 The premiere issue of the war: the Declaration of Independenceâ¦

Certainly the overriding significance of this issue is the complete printing of arguably the most important document in American history, headed: "In Congress, July 4, 1776. A Declaration by the Representatives of the United States of America, in General Congress Assembled" which begins with the famous line: "When in the course of human events it becomes necessary for one people to dissolve the political bands which have connected them with another, and to assume among the powers of the earth the separate and equal station to which the laws of nature and of nature's God entitle them, a decent respect to the opinions of mankind requires that they should declare the causes which impel them to the separation…" followed by the remainder of the Declaration of Independence, signed in type: JOHN HANCOCK, President. This document takes about three-quarters of page 4 of this 8 page issue.
One auction firm notes that the London Chronicle: "...became the first paper in Europe to publish the text of the Declaration of Independence, though it offered no comment on the content—initially, many perceived the Declaration as one in a long line of trivial annoyances from the colonies. Though it was well-received by some liberals, many in politics became incensed by its indictment of King George III and viewed it as an act of treason.
A very rare opportunity for a newspaper printing of the Declaration, and nice to have in the "enemy's" newspaper.
At a time when printings of the Declaration of Independence in American newspapers are now exceeding $100,000 and out of the reach of most collectors, this very famous title could well be one of the very few English language newspapers with a contemporary printing to be had at a reasonable price.
The front page contains a naval report from Philadelphia, carrying over to page 2, plus a report from General Howe noting: "…the rebels had more than 100 pieces of cannon for the defense of New York…it is no wonder he has not been more successful…" and more. There is reference to Bunker Hill in another brief report. Yet another page has a letter from Staten Island which has much detail, including: "Mr. Washington's headquarters were lately removed to the City Hall…" plus other tidbits as well.
Complete in 8 pages, 8 1/4 by 11 1/2 inches, tiny pin holes at the blank spine from disbinding, very nice, clean condition.