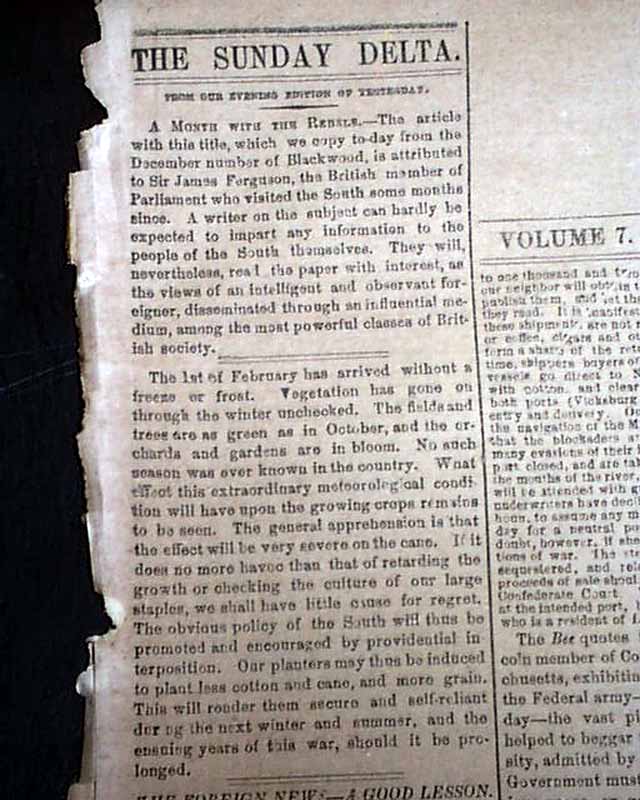 
SUNDAY DELTA, New Orleans, Feb. 2, 1862  Truly Confederate newspapers from New Orleans are very difficult to find, as Admiral Farragut entered the mouth of the Mississippi in mid-April, 1862 and finally took New Orleans on April 28. Shortly thereafter Benjamin Butler moved in and took control of the city, it surrendering without a fight. So "Confederate" issues from New Orleans are limited to those published between Louisiana's secession from the Union on January 26, 1861 and the end of April, 1862, just a brief 15 month period.
Among the front page items are: "A Month with the Rebels"  "What the Morning Journals Say" among some literary items.
Inside has: "Gen. Beauregard at Columbus" "A Diabolical Manifesto" "From Lincolndom Via Richmond: "The Burnside Expedition" "Skirmish Near Occoquan, Va." " "Fort Pulaski Dodged By the Enemy" and more.
Four pages, evenly toned, irregular at the spine margin