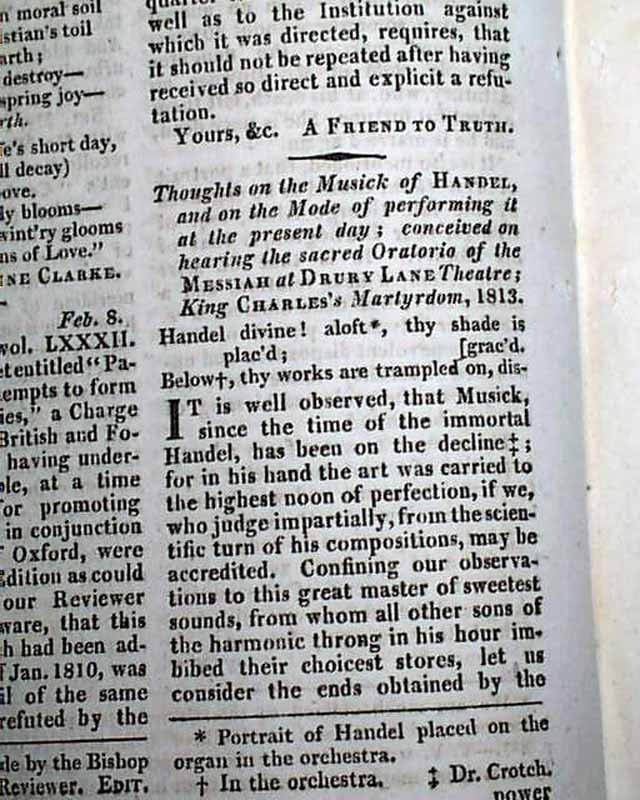 Under: "Review of New Musical Publications" is: "Mary's Warning: an Arietta, composed with an Accompaniment for the Piano-forte, By Lewis [sic] van Beethoven." The review includes: "We are much pleased with this song. The vocal melody is elegant & pathetic; the accompaniment is tasteful & ingenious...Beethoven is considered by many musicians as the first composer at present living. It has recently been stated...that he had received offers form a foreign government; but that three noblemen of Vienna had engaged him to remain in the Austrian dominions by giving him a salary of 4000 florins."
It is rare to find period mention of Ludwig van Beethoven in a publication (he died in 1827), and his lack of international acclaim at the time is borne out by the incorrect first name. Great also that mention is made of him being: "...the first composer at present living...".
Additionally, an early page has "Thoughts on the Musick of Handel & on the Mode of Performing it at the present day, conceived on hearing the sacred Oratorio of the Messiah..." which takes over a full page.
Near the back under "America" is a curious article beginning: "In some of the New York Federal papers there are a serious of articles written on the propriety of dissolving the Union & separating the Eastern from the Southern states...". Also a report of the capture of the Java by the Constitution.
The three plates called for are present.
Complete in 104 pages, full title/contents page featuring an engraving of St. John's Gate, 5 by 8 1/4 inches, very nice condition.