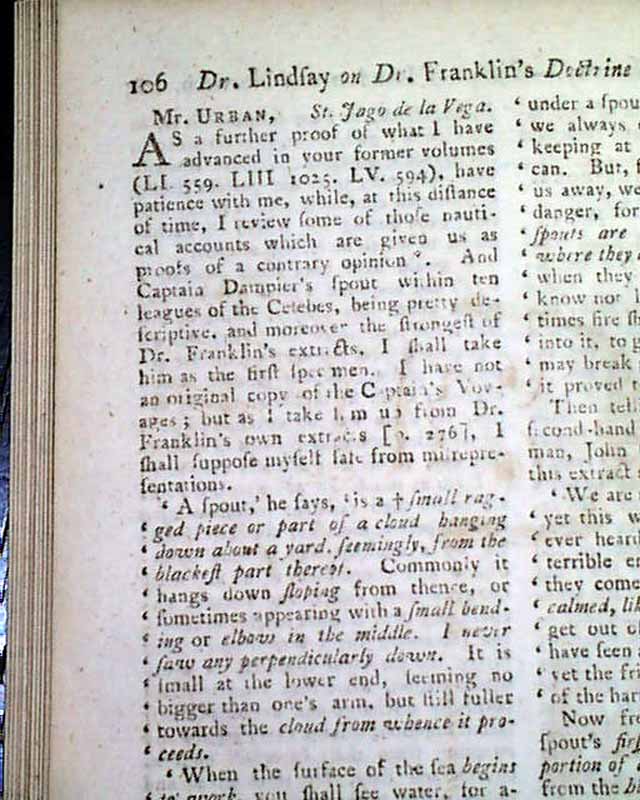 Item # 673386 GENTLEMAN'S MAGAZINE, London, England, A two issue set: February & March, 1788
February issue: Perhaps the most interesting article is: "Dr. Lindsay on Dr. Franklin's Doctrine of Water-spouts" which comments on Ben Franklin's work. This article takes 2 1/2 pages and one of the plates includes prints of various water spouts.
An article: "Edict in Favour of America, Issued at Paris" begins: "While the British court are endeavouring in some measure to discourage the American trade, the French are pursuing the quite contrary policy..." with more taking more than a full page.
The article: "Circular Report of the Committee for Abolishing the Slave Trade" relates to the now-famous anti-slavery medal which was created (print appears in the March issue).
Included are all three plates called for, one showing the waterspouts as noted above.
March issue: The most notable content in this issue would be the full page plate which includes four images, one of which is a small print of the medal to slavery, titled: "Am I Not A Man And A Brother?" which shows a slave with his hands in chains. This is a print of what is considered the most noteworthy abolitionist/anti-slavery 18th century medallion which was worn by many of the elite class to show support for abolition. It was designed by Josiah Wedgwood, the grandfather of Charles Darwin. The related article is in the February issue.
Other articles include: "Cricket and Whist, Whether Games of English Invention" "The True Author of Robinson Crusoe" "Cautions Hinted to the Committee on the Slave Trade" and much more.
Near the back under "America" is one of the most famous speeches by anyone on the new Constitution. It is prefaced with: "The following is given as the genuine speech of his Excellency Benjamin Franklin, Esq. to the President of the late Continental Convention immediately before signing the Proposed Constitution". In reality Franklin was too weak to give it so he had fellow Pennsylvanian, James Wilson, give it. The website usconstitution.net calls it a "masterpiece".
Included are all 3 plates called for.