Home > Back to Search Results > Beauregard's letter of praise on the Battle of Manassas...
Click image to enlarge 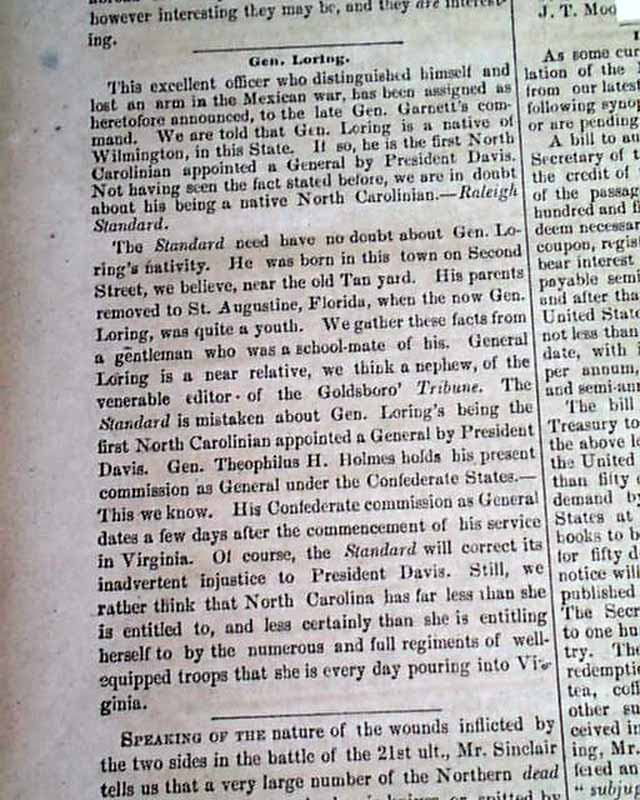 Beauregard's letter of praise on the Battle of Manassas...


THE DAILY JOURNAL, Wilmington, North Carolina, Aug. 7, 1861  This is one of just a few newspapers which printed: "Confederate States of America" in their dateline.
While the ftpg. is taken up with ads, inside has some very good war content including a lengthy item: "Notes, Facts and Queries for the People". This includes an interesting bit: "...Yes, in the eyes of God & man, morally, constitutionally, Abraham Lincoln is a perjurer and murderer. This is no figurative exaggeration. It is not the coloring of prejudice, but the sober judgment of truth, founded upon facts & principles which admit of no controversy..." and more.
Also: "Lincoln's War Measures" "Gen. Loring" and a nice letter signed by: J. E. Johnston and G. T. Beauregard to their soldiers congratulating them for their efforts in the Battle of Manassas. This is followed by a similar letter of congratulates signed: Jeff. Davis, to General Beauregard.
Four pages, very nice condition.

The Yankees in the South...