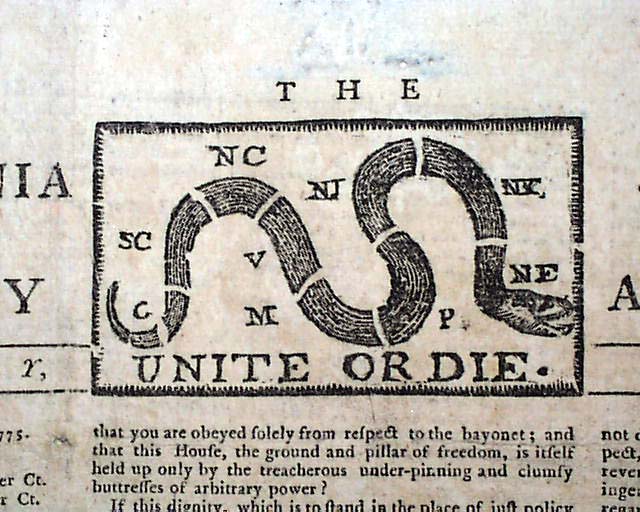 THE PENNSYLVANIA JOURNAL; AND THE WEEKLY ADVERTISER, Philadelphia, April 5, 1775

If there was one graphic which represented the spirit of the Revolutionary War it would have to be the ubiquitous segmented snake with the famous "Unite Or Die" caption.  The engraving, a prominent device in the masthead of this newspaper, shows a snake cut into various pieces, each with a label of a colony with the implied message that only by each of the separate colonies uniting under a single cause could the country--the snake--hope to strike back & be successful in defeating the British.
Ben Franklin is credited with creating this device, considered the very first political cartoon when he used it in his Pennsylvania Gazette in 1754 to rally the colonies to unite during the advent of the French & Indian War. It would become a symbol of colonial freedom during the Revolutionary War. This engraving is found in most history books, but very rarely is such an edition of the Pennsylvania Journal found & offered to the collector market.
Adding to the displayability of this newspaper is the content of the front page, taken up in its entirety with: "The Speech of Edmund Burke, Esq. on American Taxation, April 19, 1774" which is continued from the previous issue, carries over to page 4, and continues in a future issue. A great wealth of content relating to the troubling relationship between England & the colonies.
Page two has a plan for the uniting of the various colonies "...for their mutual defense & security..." suggested by Ben Franklin in 1754, and introduced with a note mentioning: "The following plan bears so strong a resemblance to that introduced into the late Congress ...as his own..." (see). Other content within relates to relations with England, plus there is a document from: "Provincial congress, Concord, March 24, 1775" concerning Massachusetts putting itself in a defensive position against the British: "...necessary for the safety of a free people, and the preservation of their Liberties, that they at all times keep themselves in a state of actual defense against every invasion or depredation, and this colony being still threatened by a powerful army posted in its capital with a professed design of executing certain acts of the British Parliament calculated to destroy our invaluable rights and liberties..." with more (see), signed in type by: John Hancock, President..
Additional great content concerning relations with England, including a letter from London noting in part: "...The nations are view the present crisis with equal anxiety as the Americans. All Europe have their eyes fixed on the important conflict...Lord North had hard work to apologize for & explain away his vapouring expression, 'I will have America at my feet'. Lord Cambden in the House on the say before said, 'were I an American I would resist to the last drop of my blood' ".
Four pages, never bound nor trimmed, a bit of foxing and some staining at the bottom margin, with light damp staining near the bottom as well. Minor rubbing to the top of the front leaf not affecting any text. Some rubbing at a fold in the third column of the ftpg., and some foxing to a portion of pg. 2 as well.  An exceedingly rare opportunity for a most desirable, displayable, and uncommon newspaper.