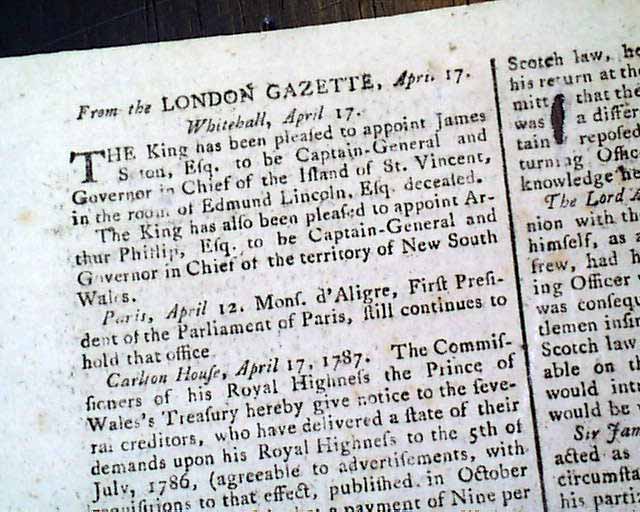 
THE MORNING POST & DAILY ADVERTISER, London, April 18, 1787  The top of page 2 has an article: "Boxing" noting in part: "...anticipating the  laurels of Martin, the hitherto famous Bath Butcher; but the fates determined otherwise; to Mendoza conquest was decreed to the no small gratification of his sable-visaged brethren. Previous to the combat six to one were offered be the knowing-ones in favour of Martin..." with more on the fight.
Daniel Mendoza was a famous Jewish boxer who transformed the English stereotype of a Jew from a weak, defenseless person into someone deserving of respect. He is said to have been the first Jew to talk to the King, George III. He was the British boxing champion from 1792-1795.
The top of page 2 has an early Australia item: "The King has also been pleased to appoint Arthur Phillip, Esq. to be Captain-General and Governor in Chief of the territory of New South Wales."
Four pages, red tax stamp on page 3, very nice condition.