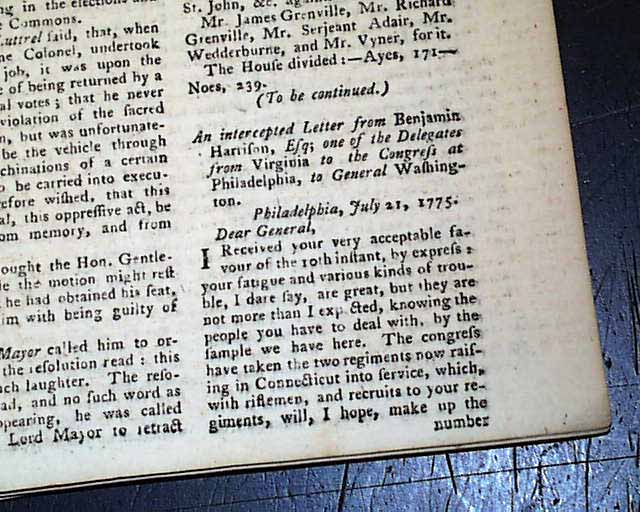 Item # 673248 THE GENTLEMAN'S MAGAZINE, London, England, September, 1775  A nice issue with much historic content from the beginning months of the Revolutionary War.
Perhaps the best content is the very nice half page illustration of the "Redoubt & Intrenchment on the Heights of Charles Town, Commonly called Bunker Hill, Opposite Boston, attacked & Carried by his Majesty's Troops, June 17, 1775" with some text on the illustration as well. A great graphic relating to the Battle of Bunker Hill.
Also in the issue is an article: "An Intercepted letter from Benjamin Harrison to General Washington" which contains much on events of the war and takes nearly two pages. There is also a great & lengthy article titled: "Resolutions of Congress on the Conciliating Proposition of Parliament" on Congress rejecting the conciliation plan of Lord North, which takes over 2 pages and is signed in type: JOHN HANCOCK. The article begins: "The following paper may be considered as the ultimatum of the American Continental Congress..." and has a dateline of Philadelphia, July 31, 1775.
Also: "Petition of the American Congress to the King" which is signed in type: John Hancock, and an excellent article: "Account of the Proceedings of the American Colonists since Passing the Boston Port Bill". Within this article is a nice letter to General Gage, signed in type: George Washington, with his reply signed: Tho. Gage, concerning the treatment of prisoners. This full report takes 5 1/2 pages.
Included is the foldout map of roads in England called for.
Complete in 48 pages, 5 by 8 1/4 inches, full title/contents page with an engraving of St. John's Gate, great condition.