Home > Back to Search Results > News of Cornwallis' surrender... Benedict Arnold & the Battle of Groton Heights...
Click image to enlarge 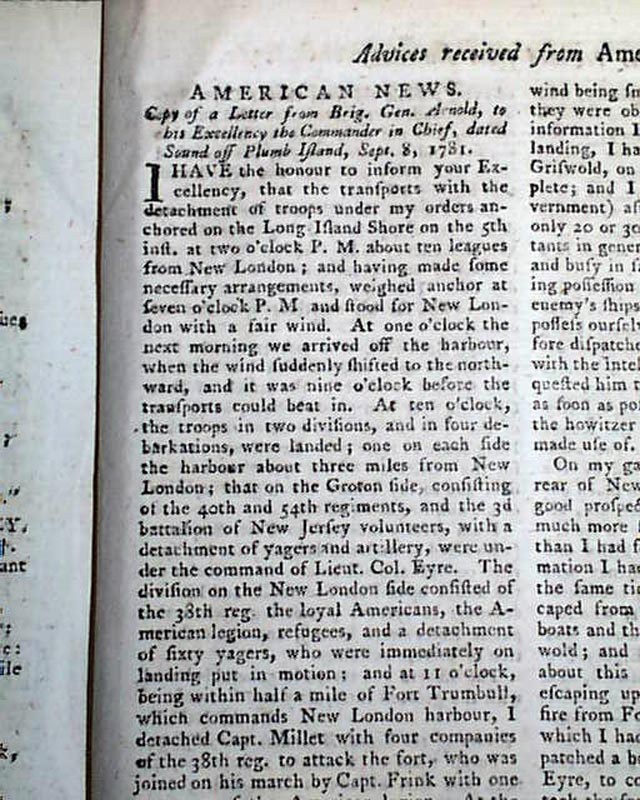 Near the back is a section headed: "American News" which has a "Copy of a Letter from Brig. Gen. Arnold to his Excellency the Commander in Chief, dated Sound off Plumb Island, Sept. 8, 1781" which takes over an entire page & is signed by him in type: B. Arnold. This is his detailed report on the taking of New London, Connecticut, known as the Battle of Groton Heights.
Also included is a letter from George Washington to Congress which prefaces another letter from Gen. Gist concerning the safe arrival in the Chesapeake of Adm. De Grasse & his 28 French ships. It was this bit of very important news that would eventually seal the fate of Cornwallis at Yorktown, who desperately wanted the assistance of Clinton's navy in New York, but which would come too late.
This is made evident but yet another report which has a letter from Clinton to Germaine which includes: "...received a letter from the Admiral...to inform me of the enemy's being absolute masters of the navigation of the Chesapeak. I thought it right to call a council of the general officers on the subject of sending the supplies already mentioned...concurred with me in opinion that it was most advisable to wait until more favourable accounts from Rear Adm. Graves or the arrival of Adm. Digby rendering the sailing of the reinforcement less hazardous. In the mean time the exertions of both fleet & army shall be made to form a junction with the squadron & army in Virginia...".
Another page has content which includes: "...he had that day embarked all the troops on board the men of war from the transports...& that the whole fleet...were then under sail for the Chesapeak...". Such assistance would come too late for Cornwallis who would surrender to Washington in mid-October at Yorktown.
The report continues & notes: "...appears that on the 26th of Sept. Gen. Washington began to play his heavy artillery on York Town & before night had gained some trifling advantages."  Then further on the report becomes considerably more historic with: "...the fleet & army which sailed from the Hook on the 19th arrived off Cape Charles...when they had the mortification to hear that lord Cornwallis had proposed terms of capitulation to the enemy on the 18th..." and then also: "...we cannot entertain the least doubt of his lordship's having capitulated & that we are unfortunately too late to relieve him...the admiral has determined upon returning with his fleet to Sandy Hook...the terms of capitulation have not yet officially been received."
Truly a wealth of terrific content in this issue.
Includes the full page plate called for.
Complete in 48 pages, 5 by 8 inches, full title/contents page featuring an engraving of St. John's Gate, great condition.

A nice Revolutionary War era magazine from England presenting the war reports with a British bias. This was the first periodical to use the word "magazine" in its title, having begun in 1731 and lasting until 1907.