Home > Back to Search Results > Much reflection on the prior year... Ethan Allen...
Click image to enlarge 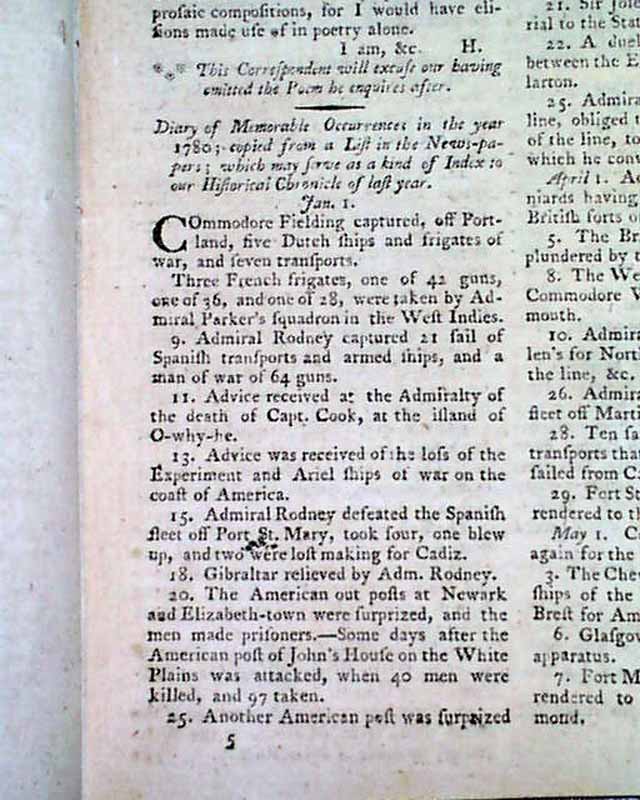 Much reflection on the prior year... Ethan Allen...

Item # 673193 GENTLEMAN'S MAGAZINE, London, January, 1781  Under "Diary of Memorable Occurrences in the year 1780..." is a lengthy list of item & includes: "The American out posts at Newark & Elizabeth-town were surprized & the men made prisoners...American post of John's House on the White Plains was attacked when 40 men were killed & 97 taken. Another American post was surprized in the Jerseys & 65 men taken...Sir Henry Clinton issued a Proclamation in America, offering pardon to all those who should return to their allegiance...Fort Mobile on the Mississippi, taken by the Spaniards...A part of the American forces were routed by Gen. Cornwallis in South Carolina, who opened the port of Charles Town...General Arnold quitted the American service & joined the British forces under Sir H. Clinton & Major Andre was captured & executed as a spy..." and other items concerning the Revolutionary War. This list--with many European events as well--takes over 3 1/2 pages.
Under the "Historical Chronicle" is: "...the war in America becomes every day more bloody than ever. A party of rebels having attacked the town of Augusta in Georgia...was in the end defeated...of 12 prisoners which fell into the hands of the King's troops 11 were hang'd without trial...In Carolina & Georgia there have been skirmishes with various success which answers no other end but that of depopulating & ruining the country totally...Advices from Albany say that the famous Ethan Allen, with 600 effective men, have joined the king's garrison at Ticonderoga."
Included is the full page plate called for.
Complete in 48 pages, 5 1/4 by 8 1/2 inches, full title/contents page with an engraving of St. John's Gate, very good condition.