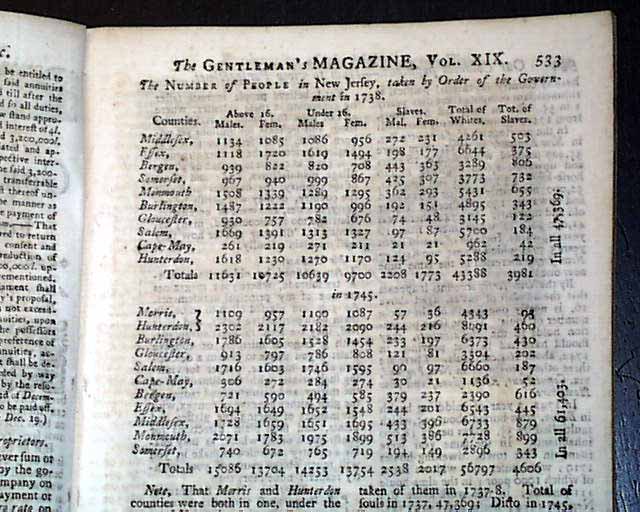 Item # 673178
THE GENTLEMAN'S MAGAZINE, London, December, 1749  Nearly a full page is taken up with charts showing the population of New Jersey in 1738 and 1745. Included among the columns are those labeled: "Male Slaves" "Female Slaves" and "Total of Slaves".
Also a chart of those: "Buried in the several Burying Grounds of Philadelphia", columns headed by religion, as well as "Strangers" and "Negroes". Related text on population in the colonies carries over to the next page.
Among other articles within are: "Causes of Sea Currents and Land Breezes" "Eclipse of the Moon Observed" with a diagram; "Unhappy Fate of Poor British Slaves" and more.
Near the back is the "Historical Chronicle" which has news reports of the day, including a letter datelined from Halifax in Nova Scotia.
No plates are present.
Complete in 48 pages, 5 by 8 1/4 in., full title/contents page featuring an engraving of St. John's Gate.