Home > Back to Search Results > Rare Confederate title with a front page address by Braxton Bragg...
Click image to enlarge 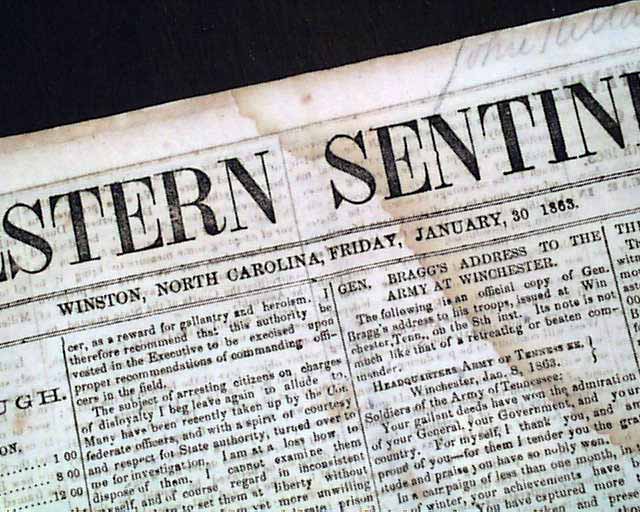 
WESTERN SENTINEL, Winston, North Carolina, January 30, 1863  The ftpg. contains a: "Special Message of Gov. Vance" to the North Carolina General Assembly which begins: "With the flight of time great events have occurred & are now crowding upon us...the invaders of our state have concentrated a large force up on our coast & are again threatening our remaining seaports..." with much more (see photos for small portions).
Also on the ftpg: "The Gallant Alabama" which tells of a naval battle involving the steamer Alabama. Also on the ftpg: "Gen. Bragg's Address to the Army at Winchester" which is signed by him: Braxton Bragg, Gen'l Com'dg.  Also: "The Surprise at Holly Springs" concerning a Civil War battle, and "The Destruction of the U.S. War Steamer Hatteras".
War-related content in on pgs. 2 & 3 as well, with: "State Assumption of the War Debt" and "Northern Items" and "Prospects in Tennessee" and "Conscripts! To Arms! to Arms!!" plus there is: "A Proclamation" by the governor of North Carolina.
The bkpg. has: "The Yankee Army" and the: "Report of the Honorable Secretary of the Treasury" plus various ads, including a: "$270 Reward" for the capture & return of nine deserters, plus another ad headed: "Deserters".
Complete in 4 pages, a light water stain in the upper right of each leaf, otherwise in very nice condition.
An opportunity for not only a very rare Confederate title, but one with some fine content. This is a very rare title from the Confederacy. According to Brigham only four institutions in the United States have any holdings of this title from the Civil War, most just a few scattered issues. The American Antiquarian Society has no issues recorded from this era.