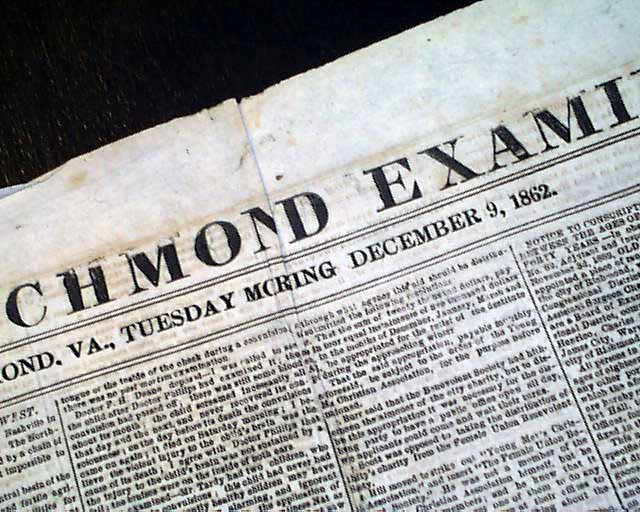 
DAILY RICHMOND EXAMINER, Virginia, Dec. 9, 1862  Among the front page items are: "Evacuation of Winchester" "The State Line" "East Tennessee" "The Situation In The West" "Homespun" "City Intelligence" "Richmond Detectives in Washington" and other items including advertisements.
The back page features the lengthy editorial which begins: "The preparations of the United States to subjugate the South are now truly gigantic...a fanaticism, a desperate avidity that should banish from every Southerner's mind all thought of an early peace, & nerve every loyal Southern hand for a battle in which there will be no quarter..." and much more. Other items include: "Telegraphic News--From Mobile..." "Escape of A Minister From Imprisonment In the South--What He Says--Remarkable Stories" "Additional From the North" and more.
Complete as a single sheet newspaper with a full banner masthead, never bound nor trimmed, nice condition.