Home > Back to Search Results > On the Confederates establishing a navy...
Click image to enlarge 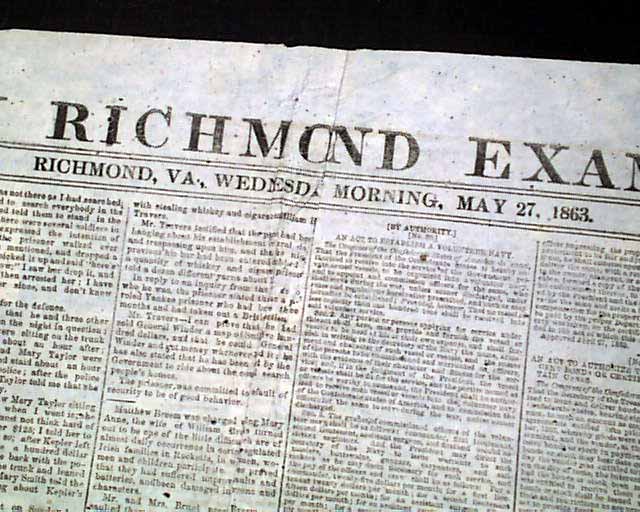 On the Confederates establishing a navy...


DAILY RICHMOND EXAMINER, Virginia, May 27, 1863  The front page includes: "The Yankees In York River" "From Vicksburg" "An Act to Establish A Volunteer Navy" "Hostage Retained" & other items including many more Acts from the Confederate Congress.
The back page has a lengthy editorial concerning the war, focused on the Act noted: "It is to be hoped that some speedy & practical results will be realized from the law passed at the last session of Congress, to establish a volunteer navy...". Also: "Later From New Orleans--Hooker's 'Victory'--The Black Regiments--The Military Tyranny in New Orleans" "Latest From Vicksburg--Heavy Loss of the enemy--Capture of Prisoners..." and more.
A single sheet issue with a full banner masthead, various creases & wrinkles, otherwise rather good.