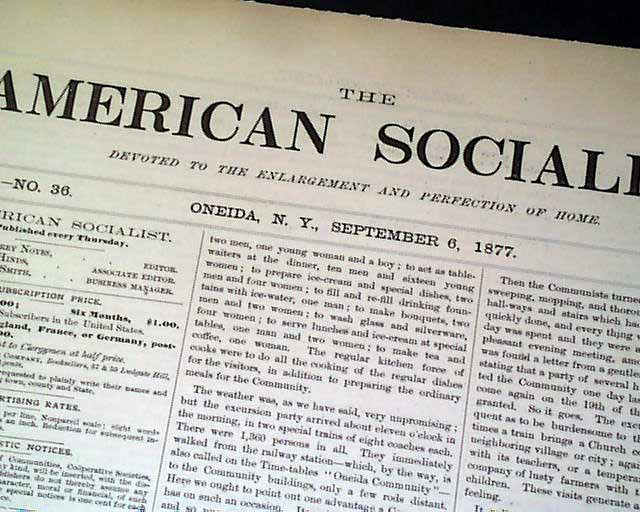 AMERICAN SOCIALIST, Oneida, New York, Sept. 6, 1877  Page 7 under "Items Of News" has 4 Mormon items, one noting: "Brigham Young died on the 29th ult. after a brief attack of cholera morbus & inflammation of the bowels. He was buried on Sunday, the 2d."
Another has: "Brigham Young discouraged free schools, but he sent several of his children to the best educational institutions of the East." And then: "Brigham Young had 52 children and a million and a half in real estate. You can's say that Mormonism didn't do well by him."
And another lengthier item begins: "For a while we shall hae some writing about Brigham Young and the Mormons...They are Christians in their belief in the New Testament & the mission of Christ; Jews in their temporal theocracy, tithing and belief in prophecy; Mohammedans in regard to the relations of the sexes, and Voudoos or Fetichists in their witchcraft, good & evil spirits..." with more.
. This newspaper is from the famous Oneida Community in New York state, an early commune in experimental living.
Eight pages, 11 1/2 by 16 inches, nice condition.