Home > Back to Search Results > The Empire Baseball Club: one of the earliest in New York...
Click image to enlarge 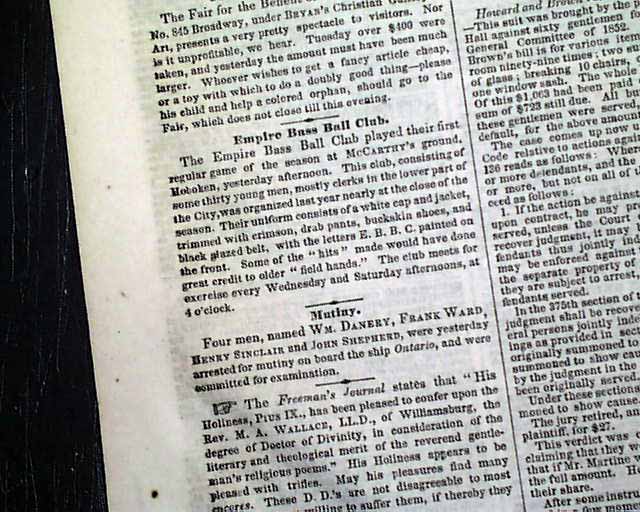 The Empire Baseball Club: one of the earliest in New York...

Page 8 has a nice report about the debut of the Empire Baseball Club. Established in October, 1854 it was just the 2nd professional baseball club to be established in New York City.
The report begins by stating that the club: "...played their first regular season game at McCarthy's ground in Hoboken, yesterday afternoon. The report also says that the club consisted of ...thirty young men, mostly clerks in the lower part of the city... and that ...the club was organized last year...at the close of the season...".
Of particular interest is the description of the clubs uniforms: "Their uniform consists of a white cap and jacket, trimmed with crimson, drab pants, buckskin shoes, and black glazed belt, with the letters E. B. C. painted on the front." The report closes by mentioning that the club meets for exercise on Wednesday and Saturday afternoon, at 4 o'clock. A great item about one of baseball's earliest and most famous clubs.
Eight pages, archival strengthening at the irregular spine, nice condition.