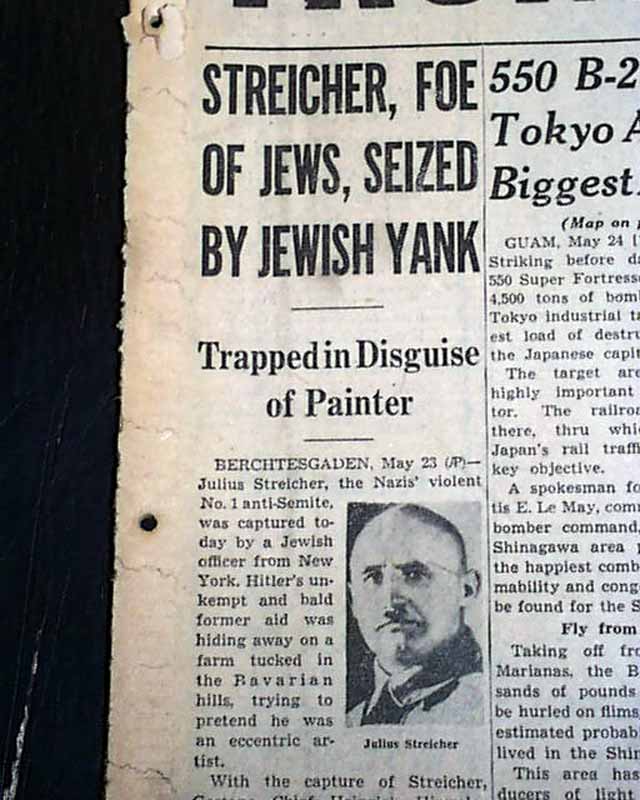 The front page has a one column heading: "STREICHER, FOE OF JEWS, SEIZED BY JEWISH YANK" with subhead and small photo. (see)
Complete with 36 pages, light toning at the margins, small library stamp within masthead, small binding holes and minor wear at the spine, generally nice.

wikipedia notes: Julius Streicher was a member of the Nazi Party. He was the founder and publisher of the virulently antisemitic newspaper Der Stürmer, which became a central element of the Nazi propaganda machine. His publishing firm also released three antisemitic books for children, including the 1938 Der Giftpilz (translated into English as The Toadstool or The Poisonous Mushroom), one of the most widespread pieces of propaganda, which warned about the supposed dangers Jews posed by using the metaphor of an attractive yet deadly mushroom. The publishing firm was financially very successful and made Streicher a multi-millionaire. At the end of the war he was convicted of crimes against humanity in the Nuremberg trials, and was executed. Streicher was the first member of the Nazi regime held accountable for inciting genocide by the Nuremberg Tribunal.