Home > Back to Search Results > The U.S. Navy to build more ships of war...
Click image to enlarge 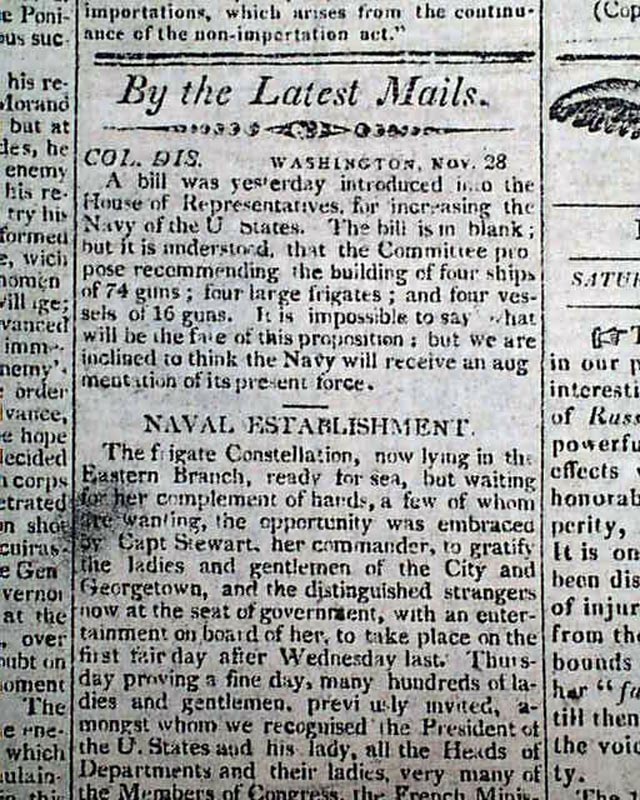 
BOSTON PATRIOT, Dec. 5, 1812  Page 2 reports from Washington: "A bill was yesterday introduced...for increasing the Navy of the U. States...propose recommending the building of four ships of 74 guns; four large frigates; and four vessels of 16 guns...". This is followed by: "Naval Establishment" beginning: "The frigate Constellation, now lying in the Eastern Branch, ready for sea but waiting for her complement of hands..." with more concerning a social event on board.
Also on page 2: "General Orders" and a report from Franklinton concerning General Harrison & his expedition to the Rapids of the Miami. Then: "N. W. Army - General Orders" concerning praise for the actions of General Tupper.
Page 2 has: "War Intelligence on the Ocean" which includes; "Particulars of the Capture of the Brig Rapid".
A wealth of fine content on the War of 1812.
Four pages, nice condition.