Home > Back to Search Results > The day Lincoln was shot...
Click image to enlarge 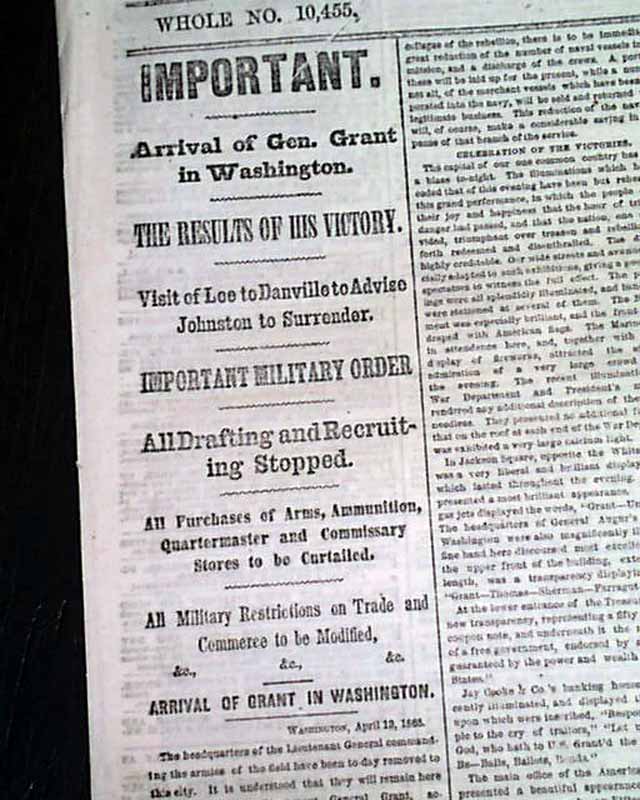 The day Lincoln was shot...


NEW YORK HERALD, April 14, 1865  This is a very significant date, as on this evening Abraham Lincoln would be shot in Ford's Theater.
The front page has some nice reports on the very end of the Civil War, with first column heads including: "IMPORTANT" "Arrival of Gen. Grant in Washington" "The Results Of His Victory" "Visit of Lee to Danville To Advise Johnston to Surrender" "Important Military Order" "All Drafting & Recruiting Stopped" and more, including the official announcement signed by Edwin Stanton, Secretary of War, ending the draft.
Also on the front page: "SHERMAN" "The Army Under Marching Orders" "Enthusiasm of Sherman's Men Over the Fall of Richmond" "RICHMOND" "The Virginia Soldiers Reported to Have Deserted Lee Before the Surrender" "Their Abandonment of Him Forces the Surrender" and more.
Additional heads concerning Grant & Lee on pg. 5 as well.
Eight pages, never bound nor trimmed, a crease to the front leaf, mild rubbing to the folds, generally good condition.