Home > Back to Search Results > Chickamauga and Chattanooga...
Click image to enlarge 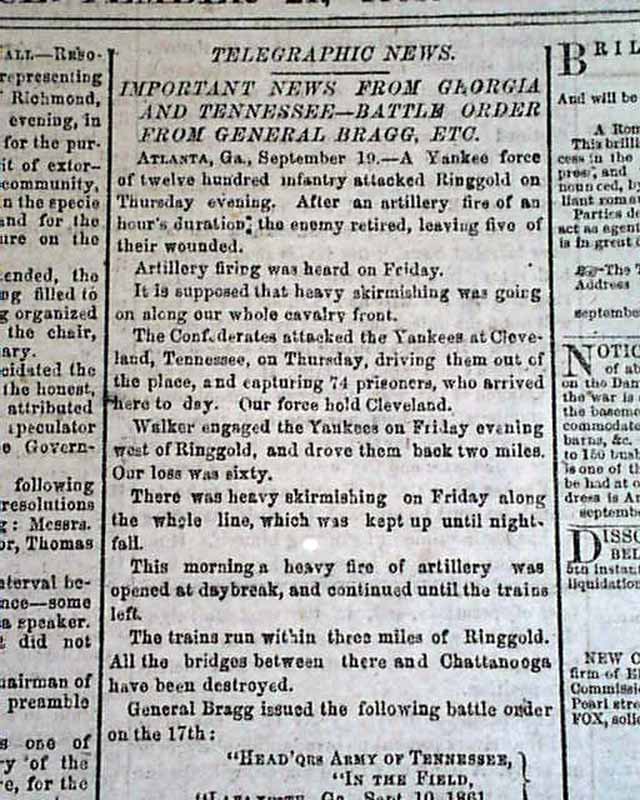 
DAILY RICHMOND EXAMINER, Virginia, Sept. 21, 1863  Not only is this a nice newspaper from the Confederacy, but it is from the Confederate capital. The front page has various war-related reports with heads: "From Northern Virginia" which includes: "...most reliable that we can obtain is that General Lee holds his position this side of the Rapidan..."; "Southwestern Virginia  "Sensation Rumors" which notes: "...was reported that Bragg had been defeated by Rosencrans & other equally false & mischievous rumors..."; "Telegraphic News--Important News From Georgia & Tennessee--Battle Order from General Bragg" which includes a lengthy General Order #180 from his thoughts of Tennessee, signed in type: Braxton Bragg.
The back page editorial begins: "The great dorsal ridge separating the basin of the Mississippi from the Atlantic region...has been scarcely less marked in the present war as the dividing line of the good & evil fortunes of the Confederacy...The tide of war has borne us steadily backwards from the commanding position we occupied in the heart of Kentucky..." with so much more on the Confederate war strategy (see for portions).  Another article is headed: "From The Army in Georgia" with a Marietta dateline. There is also much reporting from the "Virginia Legislature--Extra Session" as well as "The Siege of Charleston".
Complete as a single sheet newspaper with a full banner masthead, not uncommon from the South as every effort was made to conserve newsprint. In great condition.